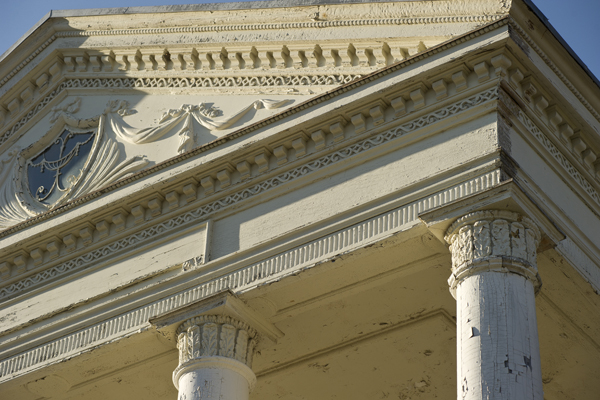 Restoration carpentry, painting and wrought iron and marble work are funded by a Save America’s Treasures grant and the W.P. Carey Foundation. Photo: Will Kirk/Homewoodphoto.jhu.edu

The work will address the south portico, a prominent and iconic element of the building’s architecture that influences the look of many other buildings on the campus, notably Gilman Hall and, most recently, Mason Hall.

The $400,000 project, which began this month, was funded by a Save America’s Treasures grant, with matching funds from the W.P. Carey Foundation.

Lewis Contractors, which oversaw restoration work done to the building in the 1980s, will manage the project.

Work includes restoration carpentry and painting of the columns, pediment, two south-facing dormer windows and the two sidelight windows within the portico. The original wrought iron railing will be restored by Krug & Sons, a Baltimore ironmongery in business since 1810.

The Lathan Co., a historic preservation specialist, will restore the marble stair treads. Catherine Rogers Arthur, Homewood Museum director and curator, said that some treads will be removed, cleaned and repaired, and a few treads will likely be replaced.

“Time and gravity have caused the staircase to spread, opening mortar joints and allowing water infiltration into the wine cellar below,” Arthur said.

The work will be completed by spring 2012.

Arthur said that she doesn’t anticipate any closures or limits to access. The south portico doors are typically used only for special tours.

“If anything, having this project in progress is a sort of bonus for visitors, an opportunity to see preservation in progress,” Arthur said. “Preservation on a historic structure is never truly done and is always an ongoing process guided by the principles of saving as much original material as possible. The goal is always to maintain what is believed to be the original appearance.”

In recent years, restoration work has been done on the building’s roof, shutters and some doors and window sashes—and on the nearby privy. Teams mended the outbuilding’s brickwork and fixed arches above the windows and doors that were collapsing. The roof and rotten windows were replaced.

Homewood House was built beginning in 1801 for Charles Carroll Jr. and his bride, Harriet Chew Carroll. The land and funds to construct and furnish the house were a wedding present from Charles’ father, Charles Carroll of Carollton, a Maryland signer of the Declaration of Independence.

Built on 130 acres of rolling meadow and forest, the “country house” afforded picturesque views toward the harbor. It exemplified the work of the most skilled Baltimore craftsmen of the Federal period, its construction incorporating a classical five-part Palladian plan, with two “hyphens” flanking the main block and connecting it to two wings.

Homewood is considered one of the finest examples of Federal-period domestic architecture in the United States. The house has spawned several imitations, including a house in Salt Lake City, Utah, aptly named “Homewood West.”

Homewood House opened as a historic house museum in 1987.