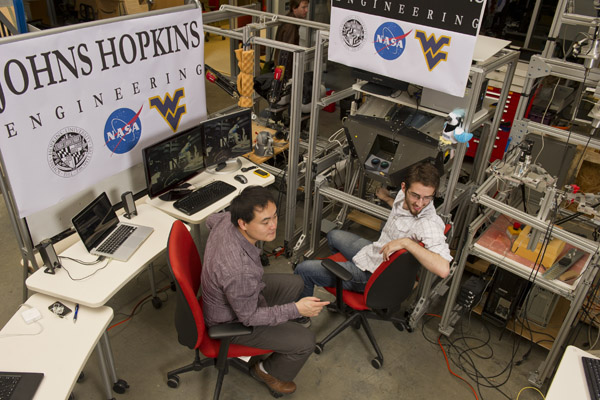 In the Robotorium of Hackerman Hall, doctoral students Tian Xia and Jonathan Bohren use a da Vinci medical console (behind Bohren) to manipulate an industrial robot located at NASA’s Goddard Space Flight Center in Greenbelt, Md. Photo: Will Kirk/Homewoodphoto.jhu.edu

Johns Hopkins engineers, recognized as experts in medical robotics, have turned their attention skyward to help NASA with a space dilemma: How can the agency fix valuable satellites that are breaking down or running out of fuel? Sending a human repair crew into space is costly, dangerous and sometimes not even possible for satellites in a distant orbit.

One answer? Send robots to the rescue and give them a little long-distance human help. Johns Hopkins scientists say that the same technology that allows doctors to steer a machine through delicate abdominal surgery could someday help an operator on Earth fix a faulty fuel line on the far side of the moon.

A brief preview of this technology was presented Nov. 29, when two graduate students at Johns Hopkins’ Homewood campus in Baltimore used a modified da Vinci medical console to manipulate an industrial robot at NASA’s Goddard Space Flight Center in Greenbelt, Md., about 30 miles away. The demonstration took place during a tour of Goddard by three members of Maryland’s congressional delegation: U.S. Sen. Barbara Mikulski and U.S. Reps. Donna Edwards and Steny Hoyer.

In this demonstration, the da Vinci console was the same type that doctors use to conduct robotic surgery on cancer and cardiac patients. It included a 3D eyepiece that allowed the operator in Baltimore to see and guide the robot at Goddard. It also provided haptic, or “touch,” feedback to the operator. The goal, Johns Hopkins engineers say, is to adapt some robotic operating room strategies to help NASA perform long-distance “surgery” on ailing satellites.

“We’re using the expertise we’ve developed in medical robotics technology and applying it to some of the remote-controlled tasks that NASA wants space robots to perform in repairing and refueling satellites,” said Louis Whitcomb, a Johns Hopkins mechanical engineering professor who was at Goddard to help supervise the recent demonstration.

Goddard is the home of NASA’s Satellite Servicing Capabilities Office, which was set up in 2009 to continue NASA’s 30-year legacy of satellite servicing and repair, which included missions to the Hubble Space Telescope. Its aims are to develop new ways to service satellites and to promote the development of a U.S. industry for conducting such operations.

To move toward these goals, NASA provided a research grant to West Virginia University, which in turn picked Johns Hopkins as a partner because of the school’s expertise in medical robotics. One task the team has worked on is the use of a remote-controlled robot to carefully cut the plastic tape that holds a satellite’s thermal insulation blanket in place. The tape must be cut and the blanket pulled back in order to expose the satellite’s refueling port. A long-distance test of this procedure, in which an operator at Johns Hopkins will guide a robot through a tape-cutting procedure in West Virginia, is slated to take place soon.

The task will be much more challenging when the target satellite is in orbit around the moon, for example. Because of the distance, there will be a significant delay between the time the operator signals the robot to move and the time these instructions are received and carried out. The research team is working on technology to help compensate for this delay.

At Johns Hopkins, the project has provided an exciting hands-on research opportunity for Jonathan Bohren, a doctoral student in mechanical engineering, and Tian Xia, a computer science doctoral student. In the recent demonstration at Goddard, Bohren and Xia controlled the robot from a workstation at Johns Hopkins.

“The long-range goal is to be able to manipulate a space robot like this from any location to refuel satellites, for instance,” Bohren said. “A lot of satellites have the potential to have their lives extended if we can do that.”

Some satellites cost millions or even billions of dollars to construct and launch. If a cost-effective robotic rescue is possible, Xia said, then abandoning spent satellites would be wasteful. “It would be like driving a fancy car and then ditching it after it runs out of fuel,” he said. “We already have a lot of computer-assisted surgical technology here at Johns Hopkins. We could use some of it to help fix and refuel satellites.”

The principal investigator of the satellite project at Johns Hopkins is Peter Kazanzides, an associate research professor in the Department of Computer Science in the Whiting School of Engineering. Kazanzides also directs the school’s Sensing, Manipulation and Real-Time Systems (SMARTS) lab.