By withholding trust in negotiations, parties ‘pay a price’ 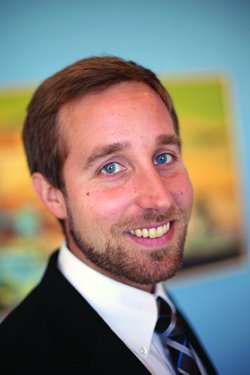 Studies have long documented that people from different cultures negotiate in different ways, though it is unclear why this happens. But a new research paper argues that different levels of trust account for these divergent bargaining strategies, with negotiators from less-trusting cultures engaging in counterproductive behaviors that lead to poor outcomes.

Recently published in the Journal of Applied Psychology, the paper is made timely by economic globalization and the resulting frequency of financial and political negotiations between parties of various nationalities and cultures, notes lead author Brian Gunia, an assistant professor in the Johns Hopkins Carey Business School.

The findings also could be applied to the lack of trusting discourse between the two major political parties in Washington, D.C., according to Gunia, whose research focused on American and Indian negotiators.

“At the end of the day, this isn’t so much about culture as it is about the central issue of trust—how negotiators from any society should develop more of a trust-based approach that helps produce understanding, insight and joint gains for the parties on both sides of the table,” Gunia said. “Whether it involves executives in India discussing business deals or members of the United States Congress addressing the budget deficit, the goal of negotiating should be beneficial outcomes and strong relationships. Negotiators will only achieve that when they trust one another and thus exchange enough information to achieve beneficial results all around.”

For the paper, titled “Paying a Price: Culture, Trust and Negotiation Consequences,” Gunia and his co-authors conducted three studies with MBA students and business managers in the United States and India. The students were asked a series of questions about how they would define trust and how willingly they would extend trust during a negotiation. The business managers held simulated negotiations over the sale of rerun rights for a cartoon TV series.

The U.S. and India offer an instructive contrast between bargaining styles and how trust governs negotiations. As explained by Gunia and his colleagues—Jeanne Brett of Northwestern University and Amit Nandkeolyar and Dishan Kamdar of the Indian School of Business—the United States and many other Western nations can be described as “loose” cultures, while India and other Eastern countries are referred to as “tight” cultures.

In the loose cultures of the West, negotiators generally assume that their counterparts are trustworthy until they prove otherwise. This assumption leads them to share information in a way that produces mutual insight and, ultimately, mutual benefits. In the tight cultures of the East, negotiators generally assume that their counterparts are untrustworthy until they show otherwise, as trust there is typically vested in rules rather than in individuals. This leads them to spend more time exchanging and substantiating offers than in understanding the needs of their counterparts, a strategy that can diminish potential gains.

The results of the three studies confirmed these descriptions and how they applied to the American and Indian participants. Although they agreed on definitions of trust and distrust, American negotiators said that they would trust (and did trust) more than Indian negotiators did, achieving better outcomes as a result. Americans saw trust as a natural element of the bargaining process, while Indian negotiators registered doubt about their counterparts’ intentions.

“It seems likely that these beliefs and values are functional within each culture and resistant to change,” the authors noted in the paper. “Nevertheless, our results highlight the importance, for Indian and American managers and their counterparts, of understanding negotiators’ cultural orientation toward trust. … The practical question that arises is how negotiators tending toward low trust, which may include Indians and others from tight cultures, can avoid leaving joint gains on the table.”

A possible answer, the paper suggests, is “to train negotiators to signal their own trustworthiness and to analyze whether their counterparts are reciprocating.” Also, low-trust negotiators could be taught to signal their priorities implicitly through offers, rather than through an explicit discussion requiring trust.

Such lessons could prove useful even in a loose culture like America, Gunia observed in an interview. “Just look at the recent talks in Congress over the deficit,” he said. “There we’ve seen how the lack of trust between the two major political parties has created a take-it-or-leave-it mentality that has led nowhere, as opposed to a more open approach in which the goals of each side could be stated and openly discussed.”