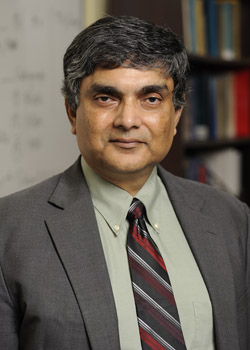 The Johns Hopkins University has established a new named professorship in civil engineering supported by an endowment set up by Michael G. Callas, a leading Maryland structural engineer, who died in 2004.

“Dr. Ghosh is a world-class researcher in civil engineering and computational mechanics, and the Callas Professorship was instrumental in recruiting him to come to Johns Hopkins,” said Nicholas P. Jones, the Benjamin T. Rome Dean of the Whiting School. “An international search was conducted, and we look forward to his great work with other faculty and students.”

Endowments such as this provide financial support for a faculty member’s research and teaching efforts, and can be used to support the work of the professor’s graduate students. It continues as long as the faculty member remains in his post. If the professor retires or leaves the university, the endowment can be awarded to another faculty member.

University officials said that Callas began contributing toward the new civil engineering professorship in 1989 and made provisions in his will to fully fund the endowment through a bequest. The Callas gift established the 21st named professorship in the Whiting School.

Callas had longtime ties to Johns Hopkins, earning a bachelor’s degree in civil engineering in 1943 and a master’s degree in structural engineering in 1947. He worked for the Whiting-Turner Contracting Co. and then, in 1958, founded Callas Contractors, a Hagerstown, Md.–based general contracting firm that takes part in the construction, repair and remodeling of buildings and public works projects. He served on the Whiting School’s National Advisory Council and the Civil Engineering Visiting Committee. In 1992, the Johns Hopkins Alumni Association recognized Callas for his contributions to the university with its Heritage Award.

Callas also was recognized for his community service. In 1998, the Mason-Dixon Boy Scouts presented him with its Distinguished Citizen Award, and Gov. Parris Glendening awarded him a Governor’s Citation for his years of community service and his commitment to the state’s young people.

In addition, he was active in the Hagerstown–Washington County Chamber of Commerce, where he served as president and regional director and was 1992 Volunteer of the Year and chairman of the Business-Education Partnership Committee.