The world, and its data, at their fingertips 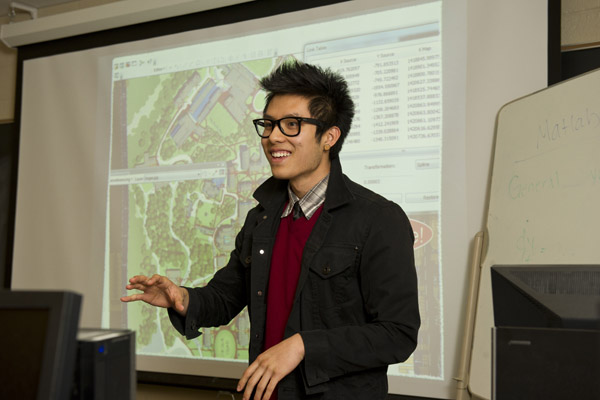 With the room’s lights turned low, the projector screen in Stan Becker’s Population Health and Development class suddenly bursts alive with a detailed 2-D topographical map of the Earth.

A Homewood undergraduate, remote in hand, zooms in on Southeast Asia like an animation culled from a National Geographic Channel special. With another click, cartoonlike icons appear on the screen representing the chief exports and cultural landmarks of Thailand and Indonesia. By turn, student groups in Becker’s class present visual tours of each of the region’s nations.

Across campus in Steve Hellen’s new Introduction to Geographic Information Systems and Geospatial Analysis course, a student uses gridded maps overlaid with population data to show the areas at risk of flooding in New Orleans. Another student, for his final project, uses maps and data to locate the greatest congestion of restaurants near the Homewood campus.

All these students developed their presentations using geographic information systems technology, or GIS, the buzzword of the moment on the Homewood campus, due to a grassroots effort led by new faculty in the Krieger School of Arts and Sciences and the Whiting School of Engineering.

What started as a relatively small group expressing interest in the expanded use of the technology has grown into a broader initiative for the formation of a Geospatial Sciences Teaching and Research Facility. The first two components of this initiative, a geospatial analysis teaching lab and a foundation GIS course, were implemented this fall.

Darryn Waugh, the Morton K. Blaustein Professor and Chairman of the Department of Earth and Planetary Sciences, said that geospatial-related activities are becoming increasingly important for many disciplines, including engineering, social sciences and humanities.

“A growing number of Johns Hopkins faculty, postdocs and students use geospatial analysis as part of their research,” Waugh said. “There was an immediate need for the teaching lab and introductory course, and once we have shown the need and success of these efforts, I hope there will be further discussion on the formation of the broader facility.”

GIS, which traces its roots to the early 1960s, is roughly speaking a system for managing and analyzing spatial information. GIS merges cartography, statistical analysis and database technology to allow the user to capture, store, manipulate, analyze and manage and then visually display all manner of geographically referenced data.

The technology is commonly used by researchers and professionals in many fields, including public health, archaeology, sociology, environmental sciences, civil engineering and other areas.

In recent years, the departments of Earth and Planetary Sciences, Civil Engineering and Near Eastern Studies have hired young faculty well versed in the use of geospatial analysis. But the new hires found a campus relatively bereft of GIS resources, and decided to do something about it.

With the assistance and facilitation of the Center for Educational Resources, an informal GIS summit was held last fall. Out of these meetings came a proposal for a GIS-dedicated facility on the Homewood campus.

Fred Puddester, then senior associate dean for finance and administration at the Krieger School, heard the call and authorized the funding for a geospatial teaching lab, which opened this semester in Dunning Hall.

Fred Thomsen, IT manager for the Krieger School, led the design and installation of the lab, which features 25 computer workstations and an Internet bandwidth intensity robust enough to process the massive amounts of data used by the geospatial software.

Four courses were taught there this fall.

Steve Hellen, director of Academic Technology for the university and a lecturer in Earth and Planetary Sciences, taught the Introduction to Geographic Information Systems and Geospatial Analysis course. Hellen, an expert on GIS technologies, said that the class “worked out phenomenally well” and gave the students a good grounding in the use of the computer-based tools.

“They learned how data were structured, and how they can interact with the data and then perform spatial analysis, which is the heart of what GIS does,” Hellen said. “We set the foundation, and then the students each picked a project to perform their own spatial analysis.”

Some key aspects of GIS are the use of maps, layering and vector data. Through software, users can stack layers of data such as elevations, street maps, land use, hydrography, satellite imagery, population density and other visually represented information.

One of Hellen’s students conducted an analysis of poverty statistics in the Midwest, while another performed an examination of the environmental risks of hydraulic fracturing in Pennsylvania.

Other faculty in the Krieger and Whiting schools are teaching discipline-specific courses that integrate GIS into assignments.

Benjamin Zaitchik, an assistant professor in Earth and Planetary Sciences, taught Remote Sensing of the Environment.

Michael Harrower, an assistant professor of archaeology in Near Eastern Studies, joined Johns Hopkins in 2010 and was part of the group that championed the further use of GIS at Homewood. He will teach GIS in Archaeology in the spring.

Harrower’s current fieldwork in Ethiopia and Oman concentrates on landscape-scale political complexity, and he often employs GIS technology in his work.

“GIS use and satellite imagery have become centrally important to what archaeologists do,” Harrower said. “Quite a number of new faculty here are interested in GIS. We all recognized a shortage of computer facilities needed to teach GIS to students. It’s been a group effort to create this new lab. Faculty from two Krieger and two Whiting departments—myself, Ben Zaitchik in Earth and Planetary Sciences, Peter Wilcock in Geography and Environmental Engineering and Judy Mitrani-Reiser in Civil Engineering—worked in close consultation, along with staff and administrators of the library.”

Speaking to the popularity of GIS use, Harrower said that you don’t have to look further than your Web browser and how we get around these days.

“Many of us now have GPS in our cars, and then there’s Google Earth and Google Maps. Esentially, these are rudimentary forms of GIS,” Harrower said. “GIS can be applied in all sort of disciplines. Almost any type of data has a spatial component—for example, a street address or a specific latitude and longitude.”

In the near future, the Sheridan Libraries’ Department of GIS and Data Services hopes to expand GIS capacity in the Milton S. Eisenhower Library, which currently has six stations outfitted with ArcGIS and staff who have expertise with the software.

For more information on the library’s GIS resources, including training and how to load a copy of the ArcGIS software, go to guides.library.jhu.edu/gis.