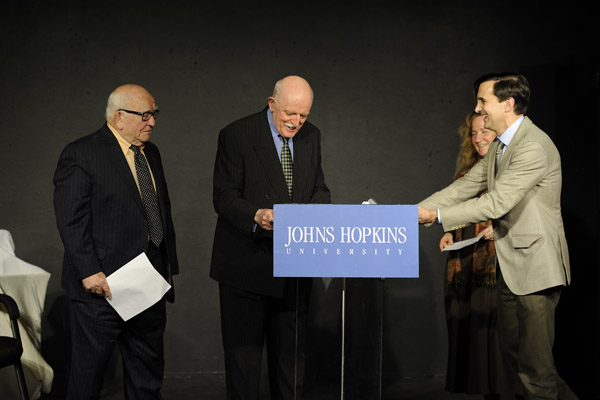 Johns Hopkins University has honored John Astin by naming the recently renovated theater in the Merrick Barn after the noted actor and teacher. The naming took place Dec. 3 at an event celebrating the completion of renovations to the barn,  and recognizing Astin’s 10-year anniversary of teaching, acting and directing at Johns Hopkins.

Notable actor Ed Asner, Astin’s longtime friend, was master of ceremonies for the event, which featured the performance of two one-act plays by some of Astin’s students. Among the audience members were Astin’s two actor sons, Sean and Mackenzie, and his wife, Valerie.

After the performances, President Ronald J. Daniels made the surprise announcement.

“In recognition of your exceptional work not only on stages worldwide but also here at Johns Hopkins, we are delighted to name this theater in the Merrick Barn in your honor,” Daniels said. “The John Astin Theatre in the Merrick Barn will be a permanent embodiment of your tremendous legacy already so beautifully reflected in the artistry of the students you have taught and the joy of audiences you have touched.”

Astin said he was “shocked, stunned and, of course, delighted and grateful.”
“I believe the recognition has come about through the achievements of the current students and the successes, after graduation, earned by those who have gone through the program and participated in the university theater,” Astin said. “Much of the credit belongs to our small but wonderful faculty and staff, supporters and parents, and to the vision of President Ron Daniels and Krieger School Dean Katherine Newman. I am stoked! They have energized and inspired me with this exquisite gesture, and I feel that it could be the catalyst that propels us toward the theater major we have long desired for Johns Hopkins.”

Astin is best known for the role of Gomez Addams on the television show The Addams Family. After majoring in drama at Johns Hopkins and graduating in 1952, Astin started in theater on Broadway. His first big break in film came with a part in West Side Story in 1961. His talent for comedy led him to roles in several television sitcoms. He received an Academy Award nomination for Prelude, a short film he wrote, produced and directed. Astin returned to Johns Hopkins in 2001 to teach acting and directing and to revitalize the undergraduate program in theater arts.

“John’s vision for the Program in Theatre Arts and Studies has shaped it into an extraordinary program that empowers students on the stage and off,” Newman said. “His enthusiasm is contagious, and the talent he continues to share with us will forever live on in this theater that bears his name.”

The John Astin Theatre is housed in a former dairy cattle barn built by Charles Carroll Jr. in the early 19th century and converted into a student center after the university moved to the property that had been Carroll’s country villa. In 1983, it was formally named the Merrick Barn in honor of Robert G. Merrick, a 1917 alumnus and 1922 PhD recipient. Today, the Merrick Barn is home to the Undergraduate Program in Theatre Arts and Studies.

Over the years, the main theater seating and flooring had become threadbare, and the proscenium needed renovation. Thanks to the generous support of the France-Merrick Foundation and other patrons, $210,000 was raised for a renovation project that was completed this summer. Improvements included replacing the theater’s lighting and its 104 seats; new flooring, paint and furnishings throughout the building; and various other improvements to create a better theater environment for students while enhancing the audience experience.

Between 120 and 160 students enroll each semester in courses that include acting, directing, play writing, stagecraft and theatrical and literary appreciation. Two or three productions are presented in the Merrick Barn each semester for audiences from the Homewood and Baltimore communities.