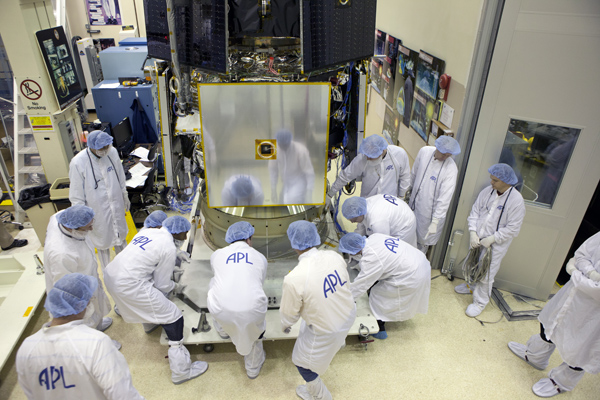 The Radiation Belt Storm Probes team at APL is shown in early December wheeling the twin satellites, stacked atop one another exactly as they will be for launch, into acoustic testing. A specialized speaker system created the same intense sounds RBSP will experience during launch and supersonic barrier breakthrough, which can reach a maximum of 134 decibels (nearly as loud as a jet engine from 100 feet away).

NASA’s Radiation Belt Storm Probes, twin spacecraft being built and tested at the Johns Hopkins University Applied Physics Laboratory, have entered a challenging series of tests designed to certify that they are ready for their August 2012 launch and two-year mission in Earth’s orbit. The coordinated measurements of the two RBSP spacecraft will advance our understanding of space weather and the sun’s influence on the Earth and near-Earth space by probing the planet’s radiation belts, which affect space weather and spacecraft operations.

RBSP embarked this month on a space environment test campaign that will last into March 2012. In a controlled test facility where engineers can monitor the spacecrafts’ condition, the RBSP team is subjecting the spacecraft to physical simulations of the stresses of launch and harshness of space operations.

“These are complex spacecraft, each with five very sensitive scientific instruments on board,” said Jim Stratton, mission systems engineer for RBSP at APL. “The environmental tests are designed to really subject the spacecraft and systems to realistic, challenging conditions and make sure they are ready to fly.”

The first test, conducted in early December, simulated the incredibly loud noises generated during launch and the beginning of supersonic travel, when the launch vehicle passes through the sound barrier (approximately 770 miles per hour). These sounds, which can reach a maximum of 134 decibels—which can be nearly as loud as a jet engine from 100 feet away—were duplicated by a specialized speaker system that is controlled via computer to match the sonic profiles of launch and supersonic barrier breakthrough. The RBSP satellites were mated together and placed at the center of a circular wall of powerful loudspeakers for this test, which was completed successfully. One of the substantial challenges for the probes is that they must survive launch as a single unit; later, above Earth, they will be separated and guided to their individual orbits.

RBSP will next undergo a vibration test. The spacecraft are mated together again and placed on a special table that will shake them to simulate the intense physical effects of launch, and make sure the probes’ systems and electronics are secure and will operate post-launch.

In January 2012, the spacecraft will undergo an electromagnetic compatibility and interference test. This involves turning on all of the spacecrafts’ internal systems without any external power or grounding to verify there are no electronic issues, and that RBSP can successfully perform its science-gathering mission.

RBSP will enter thermal vacuum testing in February. For five weeks, the craft will endure heating and cooling cycles in a vacuum environment; during the lengthy testing, RBSP will also undergo a 10-day-long mission simulation. After that, in May, the completed RBSP spacecraft are scheduled to leave APL and travel south. “The next six months are all about continuing the tremendous efforts of the outstanding team we have assembled for this mission, and getting ready to ship the spacecraft to Florida,” says Rick Fitzgerald, program manager for RBSP at APL, referring to the Kennedy Space Center, where RBSP is scheduled for launch no earlier than Aug. 15, 2012.

APL built the RBSP spacecraft for NASA and manages the mission, which is part of NASA’s Living With a Star program, guided by the Heliophysics Division of the NASA Headquarters Science Mission Directorate in Washington, D.C. The program explores fundamental processes that operate throughout the solar system, in particular those that generate hazardous space weather effects near Earth and phenomena that could affect solar system exploration. Living With a Star is managed by NASA’s Goddard Space Flight Center in Greenbelt, Md.

For more about the Radiation Belt Storm Probes, and to see photos and videos of space environment testing, go to rbsp.jhuapl.edu.