Nobelist Adam Riess gets the star treatment in Sweden 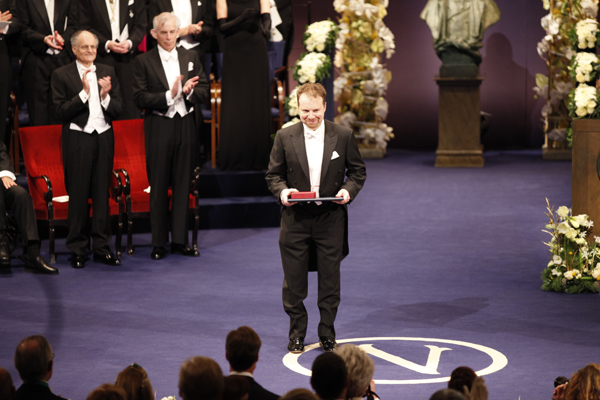 Two months after being named a recipient of the 2011 Nobel Prize in physics, Adam Riess accepted his Nobel medal from the Royal Swedish Academy of Sciences during a ceremony in Stockholm on Saturday, Dec. 10.

During their time in Stockholm, Riess and his fellow laureates were treated as celebrities. In addition to receiving their Nobel medals directly from the King of Sweden, they spent the week of Nobel-related activities in true star style, being driven around in Volvo limousines, being toasted at champagne receptions, dining at the lavish Nobel banquet hosted at Stockholm City Hall (where Riess was seated next to the Crown Princess of Sweden) and even giving autographs and posing for photos for the clusters of star-struck Swedes who typically gather outside the official Nobel events.

“This week has been magical, sort of like scientists’ fantasy camp,” Riess said from Stockholm. “I look forward to sharing the glow of this event with those in Baltimore when I return.”

Riess was recognized by the Royal Swedish Academy for his leadership in the High-z Team’s 1998 discovery that the expansion rate of the universe is accelerating, a phenomenon widely attributed to a mysterious, unexplained “dark energy” filling the universe.

Riess, a Krieger-Eisenhower Professor at Johns Hopkins and a research scientist at the Space Telescope Science Institute, shares this year’s prize with High-z teammate Brian Schmidt, of the Australian National University, and Saul Perlmutter, an astrophysicist at the University of California, Berkeley and the Lawrence Berkeley Laboratory, whose Supernova Cosmology Project team published similar results shortly after those published by Riess and Schmidt.

In addition to medals and diplomas received at the ceremony, the two teams share a cash award of $1.49 million.

The teams earlier shared the $1 million 2006 Shaw Prize for the discovery of dark energy—which Science magazine had called “The Breakthrough Discovery of the Year” in 1998—and the Peter Gruber Foundation’s 2007 Cosmology Prize, a gold medal and $500,000, for the same discovery.

Considered the most prestigious prize in the world, the Nobel has been awarded for achievements in physics, chemistry, physiology or medicine, literature and peace since 1901 by the Nobel Foundation in Stockholm. (The Nobel Memorial Prize in Economic Sciences was established in 1968 by the Central Bank of Sweden as a memorial to Alfred Nobel but is not one of the Nobel Prizes.)