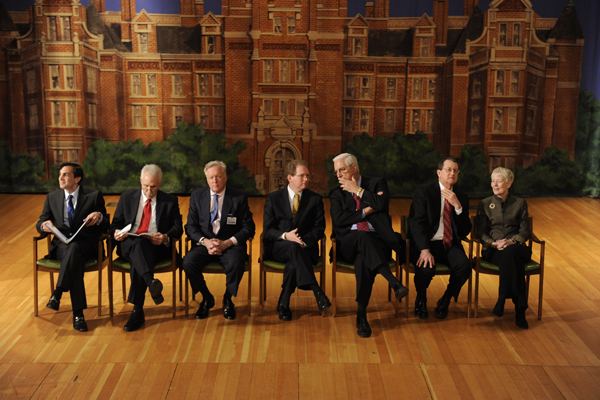 The incoming dean of the School of Medicine and chief executive officer of Johns Hopkins Medicine is all of these. But which came first?

“My love of science developed first, in high school,” Paul Rothman said. “It was during college that the idea of being a physician first developed, as a mechanism to pursue discovery in a way that might be more directly applicable to curing diseases.”

From there, Rothman, 53, has added new role after new role to his resume, culminating in his appointment Monday to what he says is “my dream job.” 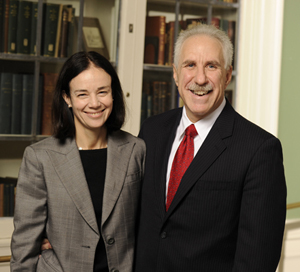 Paul Rothman and his wife, Frances Jane Meyer, on the Homewood campus. Photo: Will Kirk/Homewoodphoto.jhu.edu

“I’m thrilled, humbled and honored to have been chosen,” said Rothman, currently dean of the Carver College of Medicine at the University of Iowa and leader of that university’s clinical practice plan.

Rothman, a rheumatologist and molecular immunologist, will join Johns Hopkins on July 1, succeeding Edward D. Miller, who will retire after 15 years as both the School of Medicine’s 13th dean and the first CEO of Johns Hopkins Medicine.

Two prominent members of the search committee who have followed Rothman’s work for years say that he has brilliantly managed his evolving career and multiple, increasingly responsible roles.

Myron “Mike” Weisfeldt, the William Osler Professor and director of the Department of Medicine at Johns Hopkins, was chair of Medicine at Columbia University early in the young Rothman’s faculty tenure there and was impressed with his work as a physician, researcher and educator.

“I saw young, talented people flock to his laboratory, publish and progress in their careers,” Weisfeldt said. “I also saw his clinical commitment to excellence and heard reports of a flair for teaching. I knew he had it all, including leadership and administration.”

Weisfeldt appointed Rothman to a divisional leadership post at Columbia and later nominated him for the Department of Medicine chairmanship he held at Iowa before stepping up to the Dean’s Office there.

“His becoming dean at Iowa three years ago clearly occurred because of his excellence as chair,” Weisfeldt said. “His characteristic traits throughout have been a commitment to excellence, charisma, hard work and collegiality.”

As a researcher at Columbia, Rothman investigated the signaling pathways required for allergic immune responses and cancer, a focus he has maintained while at Iowa.

“Paul is an outstanding basic scientist. He is as rooted in basic science as he is in clinical medicine,” said search committee member Carol Greider, the Daniel Nathans Professor and director of the Department of Molecular Biology and Genetics at Johns Hopkins and a winner of the Nobel Prize in medicine in 2009.

“Paul’s work in the late ’80s laid a foundation for our understanding of cell-to-cell communication in the immune system and its role in allergic diseases,” Greider said.

In 1992, Greider noted, Rothman was appointed a Pew Scholar, recognition given to “the very top young biomedical investigators in the country.” In that role, she said, he “developed molecular methods for dissecting the pathways that become dysfunctional in asthma and other inflammatory diseases.

“As a clinician,” Greider added, “Paul has been able to translate his fundamental studies of cell signaling to models for modulation of the immune response to treat patients with severe allergic reactions. Paul personifies the goal of translational medicine; he has a true, deep understanding of the molecules and their subtle interactions that govern the immune system, while at the same time maintaining an overview of how these interactions play out in diseases such as asthma.”

Now, with that “dream job” at Johns Hopkins Medicine before him, Rothman is coming to an institution he has long admired and where he has many professional friends.

“Johns Hopkins leads the world in research and discovery, and in innovations in teaching and in the delivery of health care,” he said. “It’s the leader because of the outstanding faculty, students and staff who work there. It has recruited the best and brightest from around the world for years and continues to do so. There’s a culture of collaboration and a culture of excellence in everything they do.”

Rothman also greatly admires Miller, who took Johns Hopkins Medicine from a mid-1990s concept for joint governance of the School of Medicine and health system and turned it into a global health care brand name.

“He’s been an outstanding leader. I’m honored to be his successor. I hope I can be as successful as he has been.”

The man who made the appointment believes he can.

“Instead of being daunted by those challenges, he sees them as opportunities to do better, to serve our patients in ways that improve clinical outcomes while also improving our employment of scarce health careresources and enhancing the education of the next generation of physicians and researchers,” Daniels said.

Together, the components of Johns Hopkins Medicine—the School of Medicine and the Johns Hopkins Health System—employ more than 34,000 full-time faculty and staff.

Rothman became dean at the University of Iowa in 2008 and since then has recruited new leadership for nine departments, stabilized the medical college’s finances despite cuts in state support, begun an overhaul of the medical curriculum and opened a branch campus in Des Moines. He also has helped establish a strategic new administrative structure for University ofIowa Healthcare, developed interdisciplinary research programs and solidified the clinical practice plan.

“Dr. Rothman has been a great institution builder at Iowa, recruiting outstanding departmental leaders and strengthening the college in patient care, research and teaching,” said Lloyd B. Minor, provost and senior vice president for academic affairs at Johns Hopkins and co-chair of the search committee that brought Rothman’s candidacy to Daniels. “He’s been an outstanding university citizen, working with other deans and the universityleadership at Iowa to advance the interests of the entire university.”

Rothman first joined Iowa in 2004 as head of Internal Medicine, substantially growing the department’s reserves while recruiting new divisional leaders, increasing the faculty to a record 230, adding clinical programs, initiating programs in diversity and mentoring for young faculty members and overseeing the launches of an interdepartmental heart and vascular center and an organ transplant center.

Previously, at Columbia, Rothman rose from instructor to vice chairman for research in the Department of Medicine. While at Columbia, from 1986 to 2004, he was founding chief of its Division of Pulmonary, Allergy and Critical Care Medicine, building new clinical programs, growing the faculty from 12 to 40 and increasing clinical revenues and research funding 15-fold in six years.

He is a 1980 Phi Beta Kappa graduate of the Massachusetts Institute of Technology and earned his medical degree from Yale University in 1984, going on to train at Columbia-Presbyterian Medical Center and to accept a postdoctoral fellowship at Columbia University.

Rothman is married to physician Frances Jane Meyer, a clinical gastroenterologist on the faculty of the Carver College of Medicine since 2005. She also trained at Columbia-Presbyterian and later also served as a faculty member at Columbia University.

They have three children: Alissa, 18, a freshman at Amherst College; Daniel, 17, a senior in high school; and Eric, 13, an eighth-gradestudent.