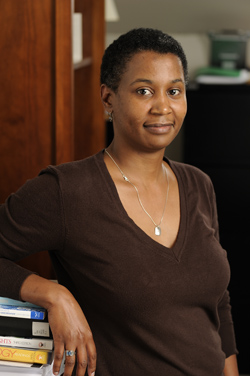 The American social hierarchy places people of mixed-race ancestry below whites but above blacks, while additional social stratifications along color lines are simultaneously taking place within the nation’s multiracial groups, according to a Johns Hopkins University sociologist’s study of U.S. Census data.

Pamela R. Bennett, an assistant professor in the Department of Sociology in the Krieger School of Arts and Sciences, studied the residential location of people who identified themselves with more than one racial group when filling out their 2000 and 2010 census forms.

Where people live has long been associated with their social status, and the connection between neighborhoods and racial segregation is well-covered territory for demographers. Bennett took this area of study a step further to see how the connection between race, residence and socioeconomic status applies to people of multiple racial identities—such as black-white, Asian-white or American Indian–white—rather than racial minorities such as African-American, Asian or American Indian.

In her research, Bennett used residential segregation as an indicator of a group’s social position and attempted to determine what the segregation of multiracial groups from both whites and racial minorities says about the social position of multiracial groups. She also wanted to find out what those patterns say about possible shifts in the nation’s racial hierarchy. She first looked at data from the 2000 census, and her findings were published in the April 2011 edition of the journal Ethnic and Racial Studies. Bennett then applied her methodology to the recently released 2010 census figures.

“For patterns of segregation in 2000, taking socioeconomic status into account does not change that picture,” Bennett said. “So while some scholars and activists view official recognition of multiracial identities as a movement toward the deconstruction of race, I caution against such an optimistic narrative for now.”

Conclusions about the role of socioeconomic status in the 2010 patterns of segregation for multiracial groups await the release of additional census data.