IPS students fan out into Baltimore neighborhoods to examine changes 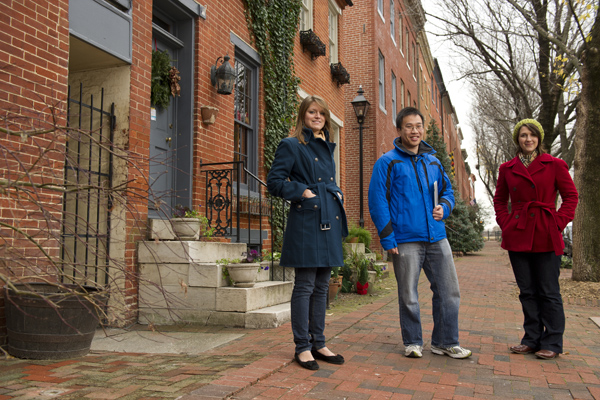 Groups of students in the Master of Public Policy program looked at five diverse areas to determine how they have changed over three decades. Above, Whitney Moyer, Ernest Le and Bonnie O’Keefe in Otterbein.

While Baltimore continues to dwindle in population size, many neighborhoods with high ethnic and racial change are growing, triggered in part by a significant increase in the number of Hispanic and Asian residents, according to a study by 62 students in the Institute for Policy Studies’ Master of Public Policy program.

For the annual Baltimore project in a course called Policy Analysis for the Real World, students examined the demographic transformation in the city’s neighborhoods during the past three decades.

The Johns Hopkins students conducted the work during the fall 2011 semester and presented their findings Dec. 13 to city officials and neighborhood association leaders who had been invited to the Homewood campus. IPS will publish the final study this spring.

The students were given a hypothetical charge from Baltimore Mayor Stephanie Rawlings-Blake to study how ethnic and racial change varied across a sampling of diverse neighborhoods, building off the results of the 2010 census. The project covered 38 census tracts in five main study areas: the northwest, the north central, the northeast, the “gold coast” and the southern peninsula.

“Race is an essential part of Baltimore’s story,” said Sandra Newman, a professor in the Institute for Policy Studies, who teaches the annual course. “With the significant increase in ethnic diversity occurring throughout the United States during the last decade, we were intrigued by the prospect that our traditionally black and white city was also becoming more ethnically diverse, and all that might imply, such as integration among ethnically diverse residents both geographically and socially, and whether Hispanics and Asians are acting as ‘buffers’ between blacks and whites.”

The students found that for every rule there was an exception, and common threads were tricky to come by.

In many cases, neighborhoods experienced a sharp decrease in white residents mirrored by an increase in black residents. In 1980, 54 percent of Baltimore neighborhoods were predominantly white; in 2000, that number was 28 percent.

In Otterbein, the population had a net rise of 113 percent, from fewer than 2,000 residents in 1980 to more than 4,000 in 2010, 76 percent of whom were white. The increase was largely attributed to the success of the “dollar homes” urban homesteading program initiated in the 1970s.

The neighborhoods of Sharp-Leadenhall and Cheswolde also had net increases, but in their cases both black and white residents were moving in.

Newman said that Cheswolde was a very interesting case.

Cheswolde, a northwest neighborhood located between Mount Washington and Fallstaff, has had a very stable ethnic and racial profile over the past three decades, roughly 70 percent white and 30 percent black, with no clear evidence of spatially segregated racial enclaves.

“A provocative thought is that Cheswolde may demonstrate that class matters more than race, though this is admittedly sheer speculation,” Newman said.

Although ethnic and racial change is often associated with decline in markers of neighborhood quality, such as median home sales price and education attainment, once again there were many exceptions, such as the areas of Coldspring, Northern Frankford, Cedmont, Loyola/Notre Dame and Cross Country.

In last week’s presentation, the students told the audience that neighborhoods such as Cheswolde demanded further study to determine the factors that have led to the community’s stability and population increase.

“The next step is to look at these exceptions and find out what is happening. There are likely lessons to be learned here,” said Bonnie O’Keefe, who focused on the Otterbein neighborhood.

To conduct the study, the students reviewed existing literature and then examined quantitative data including census statistics from 1980 to 2010, the American Community Survey and administrative data, including crime statistics and home sale prices. The students, who worked in five large groups, also interviewed residents and conducted media analyses and onsite observations of the neighborhoods.

O’Keefe, a New York native who is new to the area, said that the project exposed her to many parts of the city she now calls home.

“I learned a lot about the history of Baltimore and its neighborhoods,” O’Keefe said. “I explored areas I likely wouldn’t have seen if not for the project guiding me through it.”

Whitney Moyer said that the project was detailed and intensive, requiring many technologies and strategies.

“We learned many material skills that we can apply to different types of research projects and studies,” said Moyer, a native of York, Pa. “Very few of us had been involved in a study of this scale before.”

Each year, the semester-long study of Baltimore gives Newman’s students a strong foundation on which to build careers as public policy analysts. During the term, the students work on different analyses, including this one that focuses on a public policy problem and aims to help find a solution.

Newman said the information the students gathered could prove useful to city officials, specifically Mayor Stephanie Rawlings-Blake, who has stated an ambition to add 10,000 families to the city over the next decade.

“We’ve already achieved the goal of disseminating the study to city leaders, community organizations and neighborhood residents and beginning a discussion of ethnic and racial diversity in Baltimore,” Newman said. “I’ve received about a dozen emails since Tuesday’s presentation with follow-up questions, and a few community organizations have asked students to attend meetings and discuss the data and their implications.”