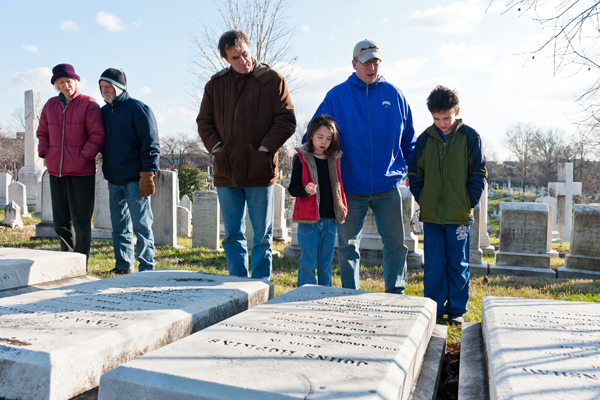 Faculty, staff, retirees, alumni and other friends and supporters gathered at Green Mount Cemetery on Dec. 24, 2011, to honor the man who left his fortune and his name to launch The Johns Hopkins University and The Johns Hopkins Hospital.

Mr. Hopkins died the morning of Dec. 24, 1873, leaving $7 million in his will to establish the university and hospital that bear his name. It was, to that time, the nation’s largest philanthropic bequest.

“We gather at his grave to remember a great man and a great act of generosity,” said Ross Jones, vice president and secretary emeritus of the university. Jones arranged the first graveside commemoration in 1973, the centennial of Mr. Hopkins’ demise, and has organized similar events annually since 1998, the 125th anniversary.

“What this one man did has meant so much for the world,” Jones said. “More personally, his legacy also means so much to all of us who have had the privilege to work, study or be healed at the institutions he founded. It seems only right to set aside a few minutes every Dec. 24 to remember him and thank him.”

Also addressing the group was Stephen C. Achuff, a professor of cardiology at the School of Medicine, who provided a brief history lesson on the role of Mary Elizabeth Garrett—who is buried with her family just steps from the Hopkins family graves—in the founding of the medical school. Garrett helped raise the necessary funds with the stipulations that women be admitted on the same terms as men, and that it be exclusively a rigorous graduate school, unlike other institutions that had few requirements. “Hopkins became the place for medical education because of that,” Achuff said.