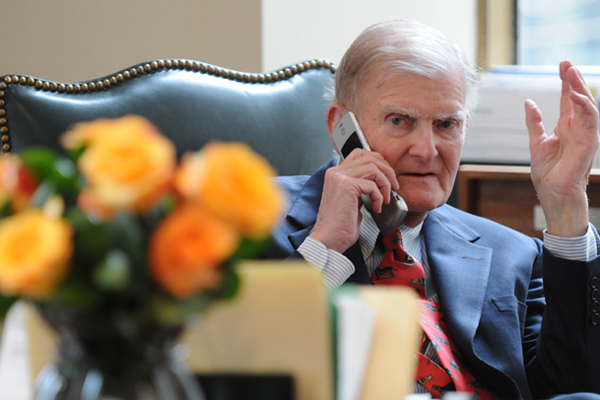 At the turn of the 21st century, Johns Hopkins was one of only three top-ranked U.S. universities without a full-time business school. JHU had offered business courses since the early 1900s, but in a part-time format. Then, on Jan. 1, 2007, a sea change: The Johns Hopkins Carey Business School was launched with Wm. Polk Carey’s gift of $50 million.

This remarkable gesture by Carey, who died Jan. 2 at age 81, transformed business education at JHU. Just as importantly, it provided a much-needed model for how business could be taught—and, by extension, practiced—in the 21st century. The gift establishing the Carey Business School, the largest ever given in support of business education at Johns Hopkins, reflected the benefactor’s faith in an entrepreneurial approach rooted in the idea that business can be a force for positive change in a troubled world.

After his death was announced, many in the Johns Hopkins community and beyond noted his influence on the university he served as a trustee, as well as his influence on his native city of Baltimore, where Carey family members have made major contributions since the late 1700s.

“I have gotten to know Bill Carey well since I arrived at Johns Hopkins nearly three years ago,” university President Ronald J. Daniels said in a statement. “I discussed with him often his vision for lifting the study of business at Johns Hopkins to a prominence commensurate with our strength in so many other disciplines. With his endowment of our undergraduate program in entrepreneurship and management, and then the establishment of the Carey Business School in 2007, he made the investments that have launched Johns Hopkins toward realizing that aspiration.

“Bill Carey saw clearly the potential impact of a Johns Hopkins business school not only on the university but also on Baltimore and Maryland,” Daniels said. “The depth of his devotion to our city and state was legendary. He demonstrated that devotion in ways that will be felt here for many, many years to come.”

Phillip H. Phan, interim dean of the business school, said in a letter to faculty, staff and students, “The vital work that all of us do here … would not be possible without the generosity and the transformative vision of Mr. Carey. To continue building on that vision will be the most fitting tribute we can offer.”

Phan added that school officials had begun to discuss plans for a formal recognition of Carey’s contributions.

Maryland Gov. Martin O’Malley told The Baltimore Sun that Carey “was just a remarkable talent and a visionary, and a generous man. He was a person who understood that the world of business, the world of education, the world of art and the world of politics are not separate worlds. They are very much connected and need each other.”

At the time of his death, Carey was the chairman of W.P. Carey & Co., a leading real estate investment banking firm headquartered in New York City. He began his career in international corporate finance in 1959 and brought the first foreign direct investment into Australia in 1960. He moved into the net leasing of corporate real estate in 1964 as chairman of the executive committee of Hubbard, Westervelt & Mottelay (later Merrill Lynch Hubbard). Before starting W.P. Carey & Co. in 1973, he served as head of real estate and equipment financing at Loeb, Rhoades & Co. and vice chairman and director of corporate finance of DuPont Glore Forgan Inc.

Carey founded W.P. Carey & Co. primarily to structure single-asset private investments. Over the years, it has evolved into one of the world’s largest publicly traded limited liability companies and currently owns and/or manages nearly 1,000 commercial and industrial properties on three continents, representing more than 120 million square feet and valued at approximately $12 billion.

Carey was educated at Princeton University and the University of Pennsylvania’s Wharton School of Business, and also received an ScD honoris causa from Arizona State University. In 1999, he served as the executive in residence at Harvard Business School.

The W.P. Carey Foundation, which Carey founded in 1988, has made substantial gifts to various educational institutions across the country, at both the secondary and collegiate levels. These include Baltimore’s Gilman School, founded in 1897 by his grandmother Anne Galbraith Carey, and the University of Maryland, where a Carey Foundation gift of $30 million in April 2011 established a law school named for Wm. Carey’s grandfather, Francis King Carey, an 1880 graduate of Maryland.

The business school at Johns Hopkins was named for Carey’s great-great-great-grandfather, James Carey of Loudon (1751–1834), a prominent Baltimore businessman of his era, a member of Baltimore’s first city council, a chairman of the Bank of Maryland and a kinsman of university founder Johns Hopkins.

Wm. Polk Carey is survived by his brother, Francis J. Carey of Ambler, Pa., and by numerous nieces and nephews. A memorial service is to be held this month in New York.