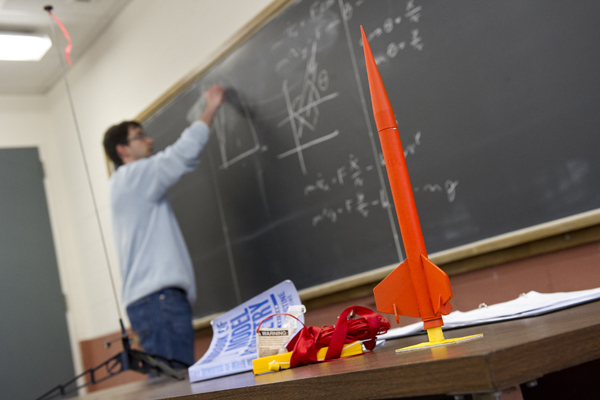 Roberto Tron, at board, created Introduction to Model Rocketry as a way to teach basic engineering and mathematical principles and apply them to a practical, and fun, goal. The class ends later this month with a launch party in Wyman Park. Photo: Will Kirk/Homewoodphoto.jhu.edu

When launching a rocket, don’t fire the ejection charge too soon after thrust phase termination. Why? Well, imagine parallel parking at 50 miles an hour, or slamming on bike brakes going full speed downhill. Things could get messy.

Don’t ignite the charge too late, either, unless you want your re-entry parachute to deploy, or be shredded, just feet from reaching Mother Earth.

The key to ejection charge timing and flight success lies in a mathematical formula based on Newton’s second law of motion. Students are learning about this gravity-based equation, and ignition systems, thrust and re-entry, in Introduction to Model Rocketry, one of dozens of academic and personal enrichment courses on the schedule for Intersession 2012 at the Homewood campus.

The Intersession program began on Jan. 9 and runs until Jan. 27. 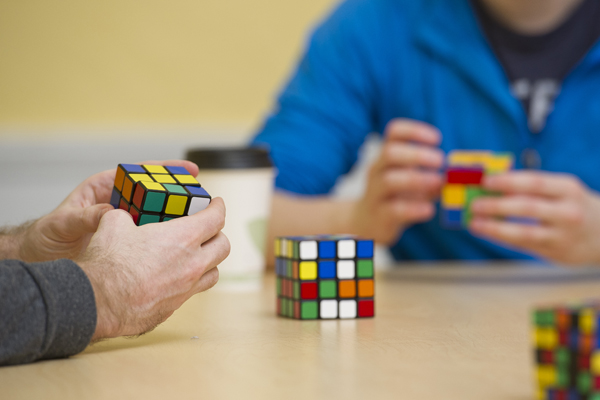 Roberto Tron, a fifth-year graduate student in Electrical and Computer Engineering, created the model-rocketry course as a way to teach basic engineering and mathematical principles and apply them to a practical, and fun, goal.

Tron calls model rocketry “the small cousin” of space rocketry, but it shares many interesting aspects with its real-world counterpart. Classes will cover both practical and theoretical topics such as laws of motion, launchers and launching systems, dynamic stability, payloads, motors, glider recovery and altitude determination.

“I’ll give them a mathematical model to predict how the rocket will move and how high it will go,” said Tron, a native of Torino, Italy, who moved to the United States for graduate study in 2007. “They’ll also learn about rocket manufacturing, analysis and design.”

Tron, a latecomer to rocketry, picked up the sport only last year. He’s notched five launches with two rockets to date, test flights conducted on his in-laws’ farm in Vermont. Tron says he wishes he had more time to practice his new hobby.

“The test flights went without major hiccups,” Tron said, “except for one where after flying over 600 meters, the rocket had to be recovered from a tree.” 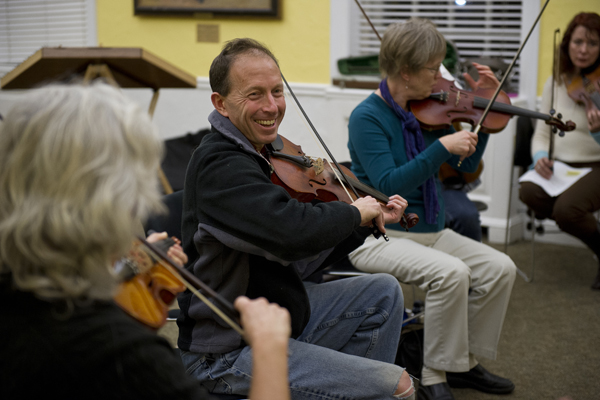 The one-credit course filled up quickly, with 20 students registered. The students—not all future rocket scientists—represent multiple majors, including Near Eastern studies, public health studies, chemistry, mechanical engineering and others.

The kit rockets they’ll assemble will be made mostly of wood or plastic, and weigh less than 1.5 kilograms. Students have some leeway on rocket sizes and motors, although Tron wants to keep them within an acceptable—and safe—range. The kits must be skill level 1 or higher, and the rockets must not be able to travel much more than 400 meters.

At the end of the course, Tron plans a launch event at a Wyman Park field, just north of the Homewood campus, where the students will shoot off their rockets—and, if their ejection charge calculations are accurate, have them safely touch down with the aid of a parachute.

The list of more-Earth-bound winter Intersession courses includes a Near Eastern Studies offering called The Archaeology of Beer; a music class titled Tunes for Toons; Film and Media Studies’ Killer Cool: Samurai/Gunfighter/Hitman; and many others, both traditional and quirky.

Each Intersession period also features an array of noncredit Personal Enrichment classes offered through the Office of Student Life. This year’s schedule includes Introduction to the Rubik’s Cube, Ballroom Dance, Dancing Like Jane Austen, Breakdance Fundamentals, Introduction to Playing the Appalachian Fiddle, Zumba Fitness, Beginning Conversational Swahili, Yoga for Beginners, Introduction to Digital Photography and the ever-popular Wine Appreciation (for students 21 and over).

The Personal Enrichment courses, which can run from three days to three weeks, are taught by students, staff and professional instructors. The academic classes are typically taught by graduate students and young faculty. 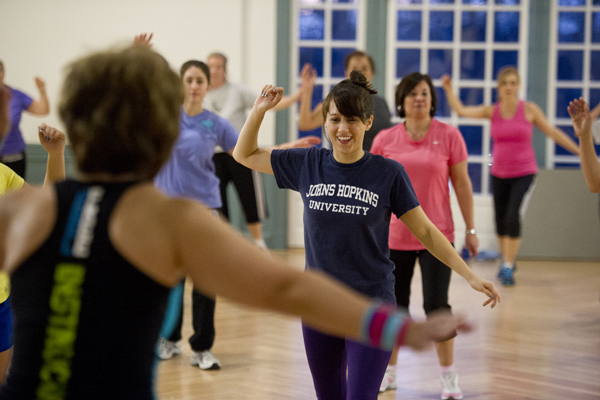 Jane Rhyner, coordinator of the Personal Enrichment program for the past 26 years, said that each year she tries to find a good mix of classes that will interest the Homewood community.

“I put out notices in October telling the campus I’m looking for instructors,” said Rhyner, who is the director of the Mattin Center and Levering Hall. “I want the classes to be leisurely and fun, and fairly nonacademic.”

More than 260 people registered for the 20-plus personal enrichment courses this year, with hundreds more signed up for the academic courses.

Whether it’s launching a rocket or gliding on the dance floor, there seems to be something for everyone.

Some Personal Enrichment classes still have openings; for information, go to www.jhu.edu/intersession.