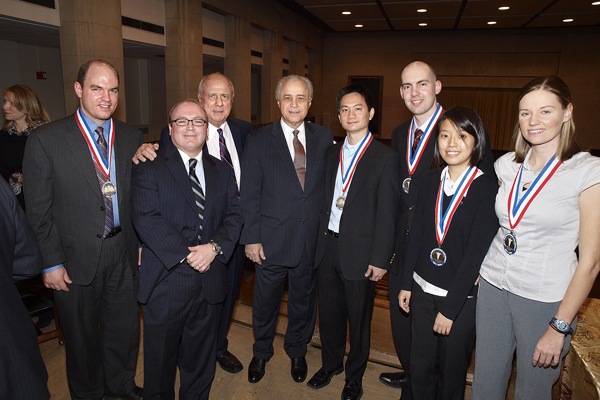 Historic Hurd Hall on Johns Hopkins’ East Baltimore campus was filled to capacity on Jan. 13 with students, faculty and staff waiting to hear five scientists—all in the early part of their careers—describe their novel ideas on how to cure metastatic cancer. The five were finalists, chosen from among 44 entrants, in a competition on creative thinking named for John Rangos Sr., chairman of the Rangos Family Foundation, who funded the awards. Each scientist had 10 minutes to present his or her idea and answer questions from a panel of faculty judges, who would select the winners based on the novelty and scientific merit of their ideas, as well as the feasibility of future clinical applications of their proposals.

Donald Coffey, whose theory on killing cancer by weakening its DNA scaffolding continues to spur innovative research, opened the event, describing it as the “Olympics” of research competitions at Johns Hopkins.

This is the first year of the program, which has the goal of encouraging young people to look at the problem of metastatic cancer, propose new research strategies and be given a chance to pursue their proposals.

“Every family knows someone who has suffered from cancer. Some forms of the disease, such as testicular cancer, are curable even after they have spread, but most are not,” Rangos said earlier. “This competition has solicited ideas from the minds of bright young students with creative approaches to solving the dilemma of metastatic cancer, and I am extremely honored to be part of it.”

The competition was open to all currently enrolled full-time students and trainees at The Johns Hopkins University, including undergraduate, graduate and medical students; residents; and fellows.

Rangos, who has had a long association with Johns Hopkins Medicine, worked with faculty members in the Department of Urology, including Coffey and Horst Schirmer, to develop the program.

Organizers plan to continue the competition in future years and perhaps open it up to students at other institutions.

“Why some metastatic cancers can be cured while most cannot is one of the most provocative questions in medicine,” Coffey said, “and it will take novel, creative approaches to overcome this very difficult challenge.”

First up to the podium was medical oncology fellow and eventual fifth-place winner Kevin Cheung, who proposes turning back the clock on cancer cells by reprogramming them into germ cells. He suggests that the reason testicular and other germ cell tumors have high cure rates is because of their undifferentiated state. Just as scientists have created immature pluripotent stem cells from adult cells, Cheung says that the same could be done with cancer cells. By age reversing resistant cancer cells, he proposes to make them sensitive to conventional chemotherapy.

Genetics postgraduate student and second-place winner Huang describes cancer as a “fight between two parasites: cancer vs. transposons.” She notes that nearly half of the human genome is made up of “jumping” DNA, short sequences of DNA that get inserted into the genome at various points; too many transposons can lead to genomic instability and kill the cell. Huang says that germ cell tumors have the highest level of transposon activity, making them more prone to cell death and, thus, more easily killed by chemotherapy drugs.  There is potential, she says, of using drugs to target proteins that normally suppress transposon activity in most cell types.

Brian Ladle, a pediatric oncology fellow and fourth-place winner, posits that cancer cure rates depend on the cancer cells’ level of uniformity. Low-risk pediatric leukemias are mostly curable, he says, and most of the cells have uniform qualities and certain genetic abnormalities in common. Cancers that are more difficult to cure are less uniform. Ladle suggests that targeting different populations of cells within cancers could result in fewer relapses and more cures.

Just before Sharabi was announced the top winner, Rangos called Johns Hopkins a “beacon of light in the measurement of medicine.” It is here, he said, that we’ll find the next generation of scientific leaders.