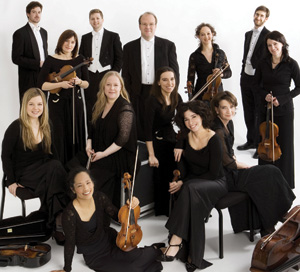 Borrowing its name from the renowned string orchestra of the court of the French kings, Les Violons du Roy is widely hailed for the exceptional energy, brilliance and vitality of its performances.

The orchestra, with a core membership of 15 players, makes its series debut with founding artistic and music director Bernard Labadie and recorder virtuoso Maurice Steger.

Since its founding in 1984, the group has specialized in the vast repertoire of music for chamber orchestra performed in the stylistic manner most appropriate to each era. Though the ensemble plays modern instruments, its approach to the works of the baroque and classical periods has been strongly influenced by research into 17th- and 18th-century performance practice; in this repertoire, Les Violons uses copies of period bows. In recent seasons, the orchestra has begun to explore 19th- and 20th-century repertoire.

Les Violons du Roy is at the heart of the music scene in Quebec City, where it has been in residence at the Palais Montcalm since 2007. The group first performed in Europe in 1988 and has given dozens of concerts in France, Germany, England, Spain and the Netherlands. Since its first U.S. performance, in 1995 in Washington, D.C., the group has made regular stops in New York, Chicago and Los Angeles.