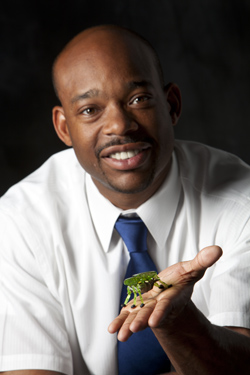 In Dwight Carr’s office, several computer screens stretch out before him to reveal an intricate network diagram. It is not a diagram of a circuit design, which might be expected from an electrical engineer like Carr, but a detailed accounting of STEM (science, technology, engineering and mathematics) outreach currently taking place at the university’s Applied Physics Laboratory.

“Our goal is to make STEM efforts at APL more effective through better coordination between program activities,” says Carr, who in July was appointed the Lab’s first STEM program manager. “We want to be more strategic about developing a vision for the Lab’s STEM programs and set goals that all of them can accomplish together.”

STEM outreach is not new to the Lab, with informal efforts dating back decades and programs such as Maryland MESA (Mathematics, Engineering, and Science Achievement) and the Gifted and Talented Intern/Mentor program for high school students dating back to 1976 and 1988, respectively.

“As APL people recognized a need, they developed programs, and the Lab’s STEM activities grew from there,” Carr said. “The result is that we have many remarkable STEM outreach programs in operation throughout the organization.” Carr will coordinate the high school mentor program, MESA, the college prep program and anything else at the Lab related to K-12 STEM engagement.

APL’s creation of the STEM program manager position represents the first step in establishing a centralized STEM Program Office. The goal is to expand the Lab’s contributions to the nationally recognized need to develop a more science- and technology-capable workforce.

The new office will serve as the umbrella for all K-12 programs at the Lab, except for those coordinated through the Education and Public Outreach Office in the Space Department. That office remains separate as a condition of NASA contracts, and it will work in partnership with the STEM office. In fact, Carr says, APL’s STEM efforts will benefit from Space EPO’s existing international network of education- and public outreach–related programs and activities.

Carr’s first step in his new job is to carefully analyze the Lab’s current programs and determine the impact APL is making through STEM outreach. Already, he says, APL engages more than 4,000 students a year. “We are doing a great job inspiring students,” Carr said, “but could do more to engage and provide hands-on educational opportunities for them.”

Carr is convinced that by explaining to them how STEM is embedded in things they use and care about, students can be inspired. One example, he says, would be to use the character Iron Man as a study topic. Teachers could ask kids to think of realistic ways that Iron Man could interface with his suit, determine how much power he would need to run it and consider what composites he would use to build it.

“Our culture and environment are teeming with STEM coolness,” Carr said. “We just have to make sure everyone knows it.”

Carr also says he wants to expose students to APL at an early age and keep them engaged by providing STEM development opportunities throughout their school years. Ultimately, the goal is to develop a broad pool of potential APL employees.

Born and raised in Washington, D.C., Carr came to the Lab in 2003, and says that his mentors have been key to his success; that recognition compels him to “pay it forward” by helping young people himself. In addition to serving as a MESA volunteer at the Lab, Carr established a relationship with Big Brothers Big Sisters and began a mentoring program at his church. He also started a Boy Scout troop, and has been a Botball adviser and guest speaker for a number of robotics clubs and camps.

When his own children reached school age, he became involved in the PTA. “I found a lot of fantastic tools online that taught STEM subjects in a fun and exciting way,” Carr said, “and I kept looking for ways to make teachers aware of them so that other children could benefit.”

Today, Carr is a member of the Howard County PTA Council Curriculum Subcommittee and is planning a Classroom of the Future Technology Fair for educators, students and parents later this year.

A version of this article appeared previously in The APL News.