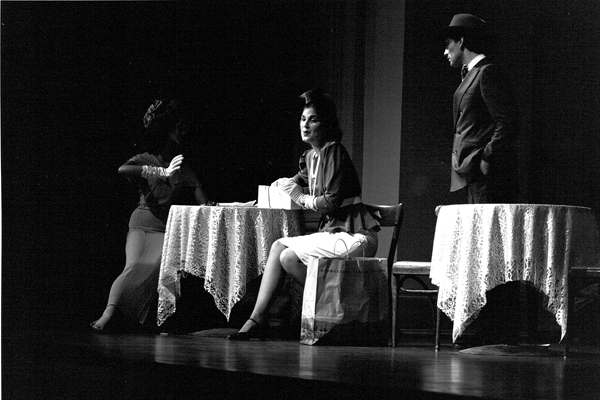 It will be Morocco one week and Egypt the next at Baltimore’s Theatre Project, as Peabody Conservatory students take the stage to sing in two chamber operas: Dominick Argento’s surrealistic one-act of 1971, Postcard From Morocco, and George Frideric Handel’s Italian epic of some 250 years earlier, Giulio Cesare.

Set just before World War I, perhaps, in a train station in Morocco, possibly, Postcard has a cast of seven characters with such vague identities as Lady with the Cake Box and Man with Old Luggage. Two mimes and two mannequins will also appear.

“The opera is incredibly theatrical, with a puppet show, slapstick, even a song in made-up language,” said Roger Brunyate, director of Opera Programs at Peabody. “It is as if the characters are playing theater games to hide their real identities.”

Composer Argento received both his bachelor of music and master of music degrees in composition from Peabody in the 1950s. The stage director for this production is Jennifer Blades, and the music director is Eileen Cornett, both Peabody faculty members. Doctor of musical arts candidate Blair Skinner will conduct.

Written by Handel in 1724 for London’s Royal Academy of Music, Giulio Cesare in Egitto (Julius Caesar in Egypt) is one of the greatest baroque operas. The new production—both condensed and contemporary—is presented at Theatre Project by the Peabody Chamber Opera in association with American Opera Theatre and Peabody’s Early Music Department.

“The recurring images for Cesare are the images of Afghanistan, sand, intense religiousness, birds and mountains,” said Timothy Nelson, founder of American Opera Theatre and a Peabody alumnus. “The piece is about terrorism, and how the desire for vengeance can turn us into exactly that which we hate and fight against.”

A specialist in baroque opera, Nelson is artistic director of the Opera Studio Nederland; the Canadian Operatic Arts Academy in London, Ontario; and the Canadian academy’s sister program, Accademia Europea Dell’Opera in Milan and Amsterdam. The music director is Peabody faculty artist Adam Pearl, who will conduct the Baltimore Baroque Band, a Peabody student ensemble.

Originally written for a castrato, the role of Cesare will be sung by countertenor Daniel Moody. Other members of the cast are Julie Bosworth, Kerry Holahan, Elizabeth Merrill, Janna Critz, Matthew Sullivan and Megan Ihnen.