A rare look inside the Amish world 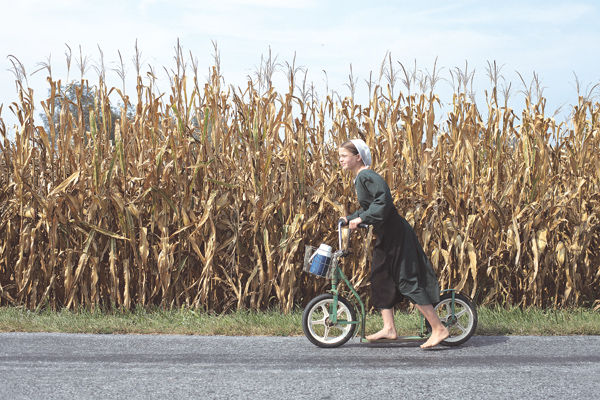 Over the course of a year, the team behind ‘The Amish’ had unprecedented access to the traditionally attention-averse Amish communities. Above, a barefoot young girl rides her pushbike past a cornfield in Lancaster, Pa. Photo: Tim Cragg/American Experience

From a distance, the Amish appear caught in 18th-century amber. In the days of iPads and hybrid cars, the members of this Christian order cling to their plain dress, bonnets, long beards, and horse and buggy rides.

The truth about this insular group, however, has more shades of gray than the London skyline, says Donald B. Kraybill, a Johns Hopkins University Press author and an internationally recognized scholar of the Amish and Anabaptist groups.

The Amish have over time selectively adopted aspects of modern life, Kraybill says, from inline skates to gas grills. Although Amish norms generally forbid personal use of the Internet and ownership of computers, some Amish firms keep in touch with customers and clients through email accounts and websites, typically run by non-Amish friends or business partners.

The many textures of these simple yet nuanced people are revealed in The Amish, an upcoming PBS documentary that draws on the expertise of Kraybill and several other authors in the JHU Press’ highly regarded series called the Young Center Books in Anabaptist and Pietist Studies.

The groundbreaking documentary, part of the award-winning PBS series American Experience, was filmed over the course of one year and features unprecedented access to Amish communities. The film’s producers claim it’s the first documentary to deeply penetrate and explore this profoundly attention-averse group.

The Johns Hopkins University Press and the Enoch Pratt Free Library co-hosted a special pre-broadcast screening of The Amish this past weekend. The film will premiere on television at 8 p.m. on Tuesday, Feb. 28, on PBS.

Kraybill, series editor of the Young Center Books in Anabaptist and Pietist Studies and the author and co-editor of a dozen books on the Amish and Mennonites, was first contacted about the documentary in April 2010. The film’s director, David Belton, and the executive producer of American Experience, Mark Samels, flew in from Boston to persuade Kraybill to participate in the project and help them gain access to Amish communities.

Kraybill said that he has been contacted many times over the past 10 years by producers and directors. He routinely said no, as he didn’t want to be involved with a work that either exploited or sensationalized a group of people with whom he has built up decades of good will.

“Most attempts at a documentary up until now have been flawed,” he said. “They featured Amish children who had not yet been baptized in the church, or [the filmmakers] used ex-Amish or actors dressed in Amish garb. They have been largely superficial and not very accurate.”

He also questioned the feasibility of any film in which the subject would refuse to be photographed for fear of excommunication.

“It’s obviously a tremendous challenge,” Kraybill said. “I know [Amish] beliefs and practices, and I told the film’s director I was not going to help violate their moral guidelines. They would have to find a way to do it without asking them to face the camera.”

The two-hour film hinges on audio-only interviews with more than a dozen Amish from several states, whose rich narratives give voice to striking visuals of Amish life. It also features commentary by Kraybill and JHU Press authors Karen Johnson-Weiner, Steven Nolt and David Weaver-Zercher.

The producers said that the film required months of patience and hard-won trust.

“In our 23 years, with almost 300 films completed, this was the most difficult that we’ve ever made,” said Samels of American Experience.

The JHU Press series on Anabaptist studies dates back to the 1980s. Since then, the Press has published 26 titles, with the latest being Selling the Amish, by Susan L. Trollinger, slated for publication later this month.

The Press has published six books by Kraybill, including his landmark work The Riddle of Amish Culture, published in 1989 and revised in 2001, which is a popular book in college-level sociology courses.

Kraybill is currently working with Johnson-Weiner and Nolt on a new book that comes out of his involvement with the PBS documentary. Amish in America will be published by the Press in spring 2013.

Kraybill grew up in Lancaster, Pa., in a Mennonite farm family. He graduated from Eastern Mennonite University and received his doctorate in sociology from Temple University and then joined the faculty at Elizabethtown College in south-central Pennsylvania, where he currently serves as Distinguished College Professor and senior fellow at the Young Center for Anabaptist and Pietist Studies.

Kraybill says that he’s always been fascinated by Amish culture.

“I found this way of life intriguing and interesting. How is it possible for a traditional group that rejects public grid electricity and public schools to continue?” he said. “And this group is not merely surviving in postmodern America; it’s actually thriving. And its success raises so many interesting intellectual questions.”

The Amish trace their roots to 16th-century Switzerland, emerging as a separate branch of the Mennonites in 1693. They first arrived in the New World in 1737, and migration continued for the next century.

Today, the Amish have more than 40 subgroups spread out over 28 states and the Canadian province of Ontario. The largest populations live in Pennsylvania, Ohio, Indiana, New York, Michigan and Wisconsin. The number of Amish, roughly 265,000, doubles every 20 years, Kraybill said, due to sizable families and strong  retention rates.

The fundamental aspects of the culture, and what unifies them, are a dedication to pacifism, community and a simple life. They meet for worship in their homes, categorically reject television and don’t own or operate motor vehicles.

“But within those beliefs there is a great deal of diversity,” he said. “It’s hazardous to talk about them in a uniform way.”

The Amish culture’s aversion to media and self-promotion often fosters urban myths, Kraybill said, such as the “wildness” of the rumspringa tradition, wherein Amish youth are said to experiment with drugs, sex and all aspects of popular culture. The rumspringa period starts at age 16, when Amish youth begin socializing with their peers on weekends and are allowed greater freedom because they are not yet baptized and not accountable to the rules of the church.

“Some will own a car. They go to movies, go to the beach, travel to a major city,” he said. “But most still live at home with their parents. They just spend time socializing with their friends and gaining their adult identity. Yes, they can get rowdy during this time, but not unlike most teenagers.”

Rumspringa ends when the individual decides to get baptized, typically around ages 18 to 21.

Kraybill says that it’s aspects of Amish culture such as rumspringa that continue to fascinate outsiders.

The JHU Press’ Amish book series, written largely for a general audience, remains one of its bestsellers.

Greg Britton, editorial director of the JHU Press, says that public interest with the Amish continues to grow, in part because of the stark contrast with the rest of American culture.

“We are all so focused on technology and media, but here is a group that has decided to opt out of that,” Britton said. “Yet authors like Don Kraybill have constantly reminded us that the Amish are not a monolithic group. They are evolving, and they don’t agree on all issues. They are as complicated as any American group. It’s a fascinating story.”

Kraybill says that the upcoming PBS documentary sheds a lot of light on the Amish, debunking some urban myths along the way.

“The filmmakers have done an incredible job,” he said. “They have managed to create a two-hour film with a subject that does not want to be covered and refused to be interviewed on camera. Most of the cinematography is done from a distance. It’s a remarkable film.”