Homewood, get ready to feel the groove.

This weekend sees the premiere of Jazz at the Johns Hopkins Club, a concert series that seeks to bring renowned, world-class musicians to the Baltimore area.

The new series kicks off on Saturday night with a performance by the Jim Snidero Quartet at the Johns Hopkins Club, a 113-year-old institution and a fixture on the Homewood campus since the 1930s. 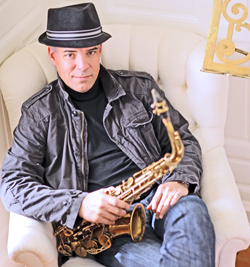 Jim Snidero opens the series with his quartet on Saturday night.

The series, which is open to the public, is being made possible by a collaboration of Peabody’s Jazz Studies Department and the President’s Office.

Gary Thomas, director and chair of Jazz Studies, met informally with President Ron Daniels last spring, and the two discussed the prospect of launching a jazz series at Homewood.

Daniels, a jazz enthusiast, later suggested the use of the Johns Hopkins Club and agreed to have his office fund the endeavor, with Peabody providing artistic oversight and administrative support.

The intent was to offer a state-of-the-art, intimate platform for high-quality jazz that could reach a broad audience.

“Through this concert series, the Johns Hopkins Club has tied together Baltimore’s rich history of jazz music, the Peabody Institute’s world-class jazz program and the appreciation for live music felt across our campus and our city,” Daniels said. “I look forward to welcoming jazz enthusiasts to the Homewood campus.”

Since its founding, the Johns Hopkins Club has served as a private club for university faculty, alumni, staff and friends of Johns Hopkins. The club serves lunch and dinner six days a week

and hosts more than 60 special events a year, including wine tastings, lectures, theater nights and holiday galas. Since 1937, the club’s home has been a three-story Georgian-design structure located near Nichols House on the northwest side of the Homewood campus.

Cem Baraz, general manager of the Johns Hopkins Club, said that the club has hosted musical performances before but never a formal music series.

“We are thrilled to host this series and bring jazz to the Johns Hopkins community and beyond,” Baraz said. “We hope to make this an exciting concert venue that exposes more faculty, staff, students and alumni to the club.”

The series’ spring 2012 schedule will feature four artists, one each month, beginning with two sets on Feb. 25 by the Jim Snidero Quartet.

Snidero, an alto saxophonist, has been an innovator in the jazz world for decades. In addition to his solo career, Snidero has played with Frank Sinatra, nine-time Grammy winner Eddie Palmieri and the Mingus Big Band. His current quartet
features Paul Bollenback on guitar, Paul Gill on bass and McClenty Hunter on drums.

The shows will take place in the club’s lounge, which seats 70. Tickets will be sold separately for each set, with performances beginning at 8:30 p.m. and 10 p.m. Bar service will be available 30 minutes before and during the performance; no food will be served.

Upcoming performances in the series include Peabody alum Russell Kirk and The Path on March 31, the John Scofield Trio on April 21 and the Roy Haynes Fountain of Youth Band on May 26. (Haynes will receive the Peabody Medal and speak at the school’s commencement ceremony on May 24.)

Thomas—a renowned saxophonist who has played in the bands of Miles Davis, Herbie Hancock and Jack DeJohnette—said that he set out to select high-caliber talent for the series, such as drummer Roy Haynes, an icon in the genre.

Snidero, guitarist John Scofield and bassist Ed Howard from the Roy Haynes band will teach master classes at Peabody during their visits to Baltimore, said Ian Sims, the academic coordinator for the Jazz Studies Department and a member of the Peabody Preparatory faculty.

“In addition to attracting prominent artists for performance, there is a clear educational benefit to the series,” said Sims, a tenor saxophone and clarinet player in the Peabody Jazz Ensemble. “Students in
Baltimore will be able to learn from some great names in jazz, an opportunity that might have otherwise been difficult to arrange.”

Tickets for the Jim Snidero Quartet are $35 for general admission and $18 for Johns Hopkins students. Tickets can be purchased online at www.peabodyjazz.org/hopkinsclub.