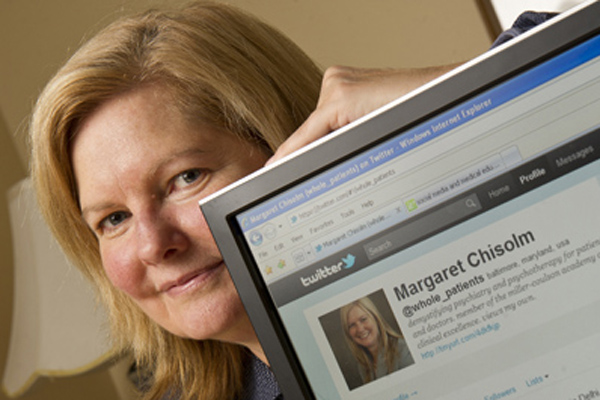 Meg Chisolm, above, and Tabor Flickinger are leading a pilot study of a social media curriculum designed to promote medical humanism and professionalism. Volunteers in the eight-week Internal Medicine Clerkship will begin with blogs. Photo: Will Kirk/Homewoodphoto.jhu.edu

Margaret “Meg” Chisolm loves a good tweet. The owner of two Twitter accounts, Chisolm plugs in whenever time allows to share news or offer some thoughts.

In a world awash in social media, the existence of another tweeter or blogger comes as no shock. What might surprise some, however, is the fact that Chisolm is a psychiatrist, clinical researcher and academic who tweets about her work and profession.

Chisolm, an assistant professor in Psychiatry and Behavioral Sciences at Johns Hopkins Bayview Medical Center, said that she is one of a growing number of medical professionals who, despite the present-day climate of strict patient privacy regulations and oversight, see the benefits of using social media to supplement their work and interact with colleagues, patients and the general public.

Chisolm connects with others through her Twitter accounts “whole_patients,” intended to demystify psychiatry and psychotherapy for patients and doctors, and “psychpearls,” which is targeted to learners interested in “clinical pearls” about psychiatry.

To help expose future medical professionals to the benefits and potential pitfalls of social media use, Chisolm and Tabor Flickinger, a clinical education fellow, have set forth on the design of a social media curriculum for students at the School of Medicine. Ultimately, the two plan to design, pilot, study and implement a curriculum that uses social media to promote medical humanism and professionalism.

As part of this effort, Chisolm and Flickinger proposed an educational research project to be conducted in the Internal Medicine Clerkship course for third-year medical students. In December, Chisolm and Flickinger received an Osler Center for Clinical Excellence small grant award to run the pilot study, which will be conducted during the first and second quarters of the 2012–13 academic year, which starts in August.

The Osler Center was established in 2002 within the Division of General Internal Medicine to train physicians in the basic elements of a sound doctor-patient relationship.

The format of the pilot study will be a voluntary online addition to clinical activities during the eight-week Internal Medicine Clerkship. One group of students will participate in a blog where they can write about and discuss their clinical experiences. Another group will serve as a comparison cohort; they will be studied but will not participate in the blog.

The blog will be private and monitored by Chisolm and Flickinger, who is principal investigator on the Osler Center grant. No other faculty or students will have access.

Chisolm said that the blog will be a space for reflection. The students can talk about powerful clinical experiences, which might encourage introspection and sharing by other students and faculty, and form a support network of helping relationships.

“They can talk about their experience with real patients, the process of learning,” she said. “Along the way, they will learn the parameters of what they should or should not talk about in this kind of public forum.”

Chisolm and Flickinger will meet with the students at the beginning and end of the pilot study. The remainder of the time, the investigators will interact with the students remotely, as the students will be in separate clinical settings: Bayview Medical Center, The Johns Hopkins Hospital and Sinai Hospital.

The investigators aim to use the blog-based educational intervention to facilitate the personal growth of medical students and promote the qualities of humanism and professionalism.

Flickinger, who herself has a Twitter account and a blog on literature and medicine called “Tea with Dr. Tabor,” said that the blog will allow the students to think about their development, professional challenges and new identities as doctors.

“They can reflect on encounters and situations that might have bothered them, or talk about successes,” she said. “This experience will teach them skills of reflective writing, and to think critically about issues of professionalism. It’s also a proactive way to get them to use social media in a professional way before they are released into the wild, so to speak. And do so in a protected way.”

Chisolm said that the blog won’t be censored, but she and Flickinger will notify the students if they cross a professional line, or come close to it. Social media, she said, clearly pose special challenges and risks.

In 2010, a physician was fired from Westerly Hospital in Rhode Island after posting information about a trauma patient on Facebook. According to the Rhode Island Board of Medical Licensure and Discipline’s 2011 ruling on the matter, the physician did not mention the patient’s name in the post but included enough information to allow others to identify the patient.

At the University of Chicago, a frenzy was set off in 2007 by a YouTube video posted by first-year medical students. The video, filmed for use in a university-sponsored talent show, was a rap parody of an anatomy lab experience set to music that depicted the students lying in body bags, dissecting corpses, dancing with plastic skeletons and studying in class. Students asked for and received permission to post the video, which became a viral hit.

Later, however, the video came under scrutiny for its content—and how it represented the school—and the university took the post down while it developed more specific guidelines for such social media use. The video was later re-posted with a disclaimer.

Chisolm said that she and Flickinger will use these cases to discuss the risks and benefits of social media and what the guidelines should be.

In future studies, students may be permitted to use other social media, such as Twitter and YouTube.

“But for now we want to stick to a blog as the medium and see how that goes,” Flickinger said. “It’s easy to set privacy controls, and the students can enter longer and more substantial posts than they can on Twitter or Facebook.”

Ultimately, the investigators hope to implement the curriculum and study its impact within the medical learning community’s longitudinal curriculum. Future external funding will be sought for Phase II of the project.

Innovative social media curricula are currently being piloted at medical schools and centers throughout the United States, including at Brown University, University of Chicago, George Washington University and the Cleveland Clinic. No such curriculum currently exists at Johns Hopkins.

Chisolm said that the impact of a social media curriculum on medical students’ personal growth, humanism and professionalism has never been reported, making this research project highly innovative.

Social media tools—such as blogs, Twitter, YouTube videos and Facebook—have the potential to transform academic environments and engage teachers and learners in new ways, Chisolm said. They also offer a way for medical professionals from across the world to connect with each other.

The use of social media, especially prevalent among younger generations and growing rapidly, she said, presents an opportunity to enhance medical education.

“Social media is here to stay, and ubiquitous in our society,” she said. “I think we need to study the benefits and teach students about the challenges.”