Astrophysicist Brice Menard and biomedical engineer Feilim Mac Gabhann of The Johns Hopkins University have won 2012 Sloan Research Fellowships, which seek to stimulate fundamental research by early-career scientists and scholars of outstanding promise by offering each a $50,000 grant, distributed over a two-year period.

The two are among 126 young scientists and economists to receive the award this year in recognition of their potential to contribute to academic advancement. Since the Sloan Foundation began awarding fellowships in 1955, 38 recipients have gone on in their careers to win Nobel Prizes.

In announcing the fellowships, Paul L. Joskow, president of the Alfred P. Sloan Foundation, said, “These outstanding men and women are responsible for some of the most exciting science being done today. The foundation is proud to support them during this pivotal stage of their careers.” 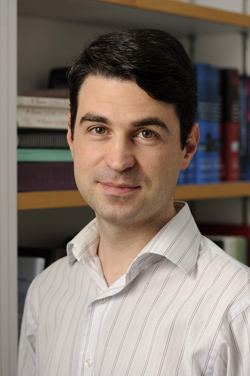 “I am very honored to receive this award and appreciate the support of the Sloan Foundation for fundamental research,” said Menard, an assistant professor in the Henry A. Rowland Department of Physics and Astronomy in the Krieger School of Arts and Sciences. “This grant will help expand the activities of my research group into new directions.”

Menard came to Johns Hopkins in 2010 from the Canadian Institute for Theoretical Astrophysics in Toronto, where he had worked as a senior research associate since 2006. A researcher in the field of extragalactic astrophysics and cosmology, he aims at achieving a better understanding of how dark matter is distributed in space and how galaxies form and evolve. To garner new insights, Menard analyzes large data sets with millions of astronomical objects, and his work has led to the detection of gravitational magnification by dark matter around galaxies, the discovery of tiny grains of dust in the intergalactic space and a better understanding of how light rays propagate throughout the universe.

“Dr. Menard is pioneering the development of powerful new techniques to mine both the current and future sets of big astronomical data to reveal profound new insights into the universe,” said Daniel Reich, chair of the Physics and Astronomy Department at Johns Hopkins. “We are very pleased that the Sloan Foundation has recognized his accomplishments and potential for future impact in the field of astrophysics. We look forward to great things from Dr. Menard.” 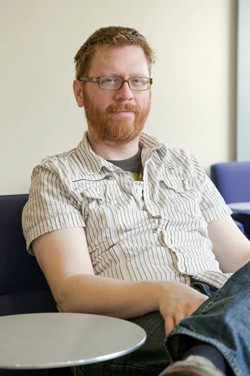 Mac Gabhann is an assistant professor of biomedical engineering and a core faculty member of the university’s Institute for Computational Medicine in the schools of Engineering and Medicine. “I was really delighted to receive this recognition,” he said. “I’m particularly happy because it reflects not just on the work that I’m doing but also on the great work being done by my lab members, both the students and the postdocs.”

Mac Gabhann received a bachelor’s degree in chemical engineering in 1997 from University College Dublin in his native Ireland and earned his doctorate in biomedical engineering from Johns Hopkins in 2006. He continued his research as a postdoctoral fellow at the Cardiovascular Research Center and the Department of Biomedical Engineering at the University of Virginia and joined the Johns Hopkins faculty in 2009.

Mac Gabhann’s current research involves both computer models and biological lab studies. One of his goals is to use genetic and physiological data to differentiate subgroups of patients who respond differently to therapies. This approach could help personalize medical care so that individual patients receive the treatment that is most likely to yield favorable results.

Earlier this year, Mac Gabhann was selected as the recipient of the American Physiological Society’s 2012 Arthur C. Guyton Award for Excellence in Integrative Physiology.
“Feilim is a young star who is merging the fields of computational modeling and fundamental biology; he is breaking new ground in modeling growth factor networks and tissue morphogenesis,” said Elliot McVeigh, the Bessie Darling Massey Professor and director of Johns Hopkins’ Department of Biomedical Engineering. “Biology, math and computer science are becoming inexorably linked, and young faculty like Feilim are driving this change forward.”

Raimond L. Winslow, director of the Institute for Computational Medicine, added, “Dr. Mac Gabhann’s work is a perfect example of the emerging discipline of computational medicine, in which experimentally based computational models of disease processes are used to obtain novel insights on disease mechanisms, and to reveal new therapies that are tailored to the needs of the individual. Biological systems, in both health and disease, are too complex to be understood without quantitative models that capture what we truly know about these systems and guide us through the highly complex landscape of biology. Dr. Mac Gabhann’s work is at the leading edge of computational medicine.”

Henry A. Rowland Department of Physics and Astronomy