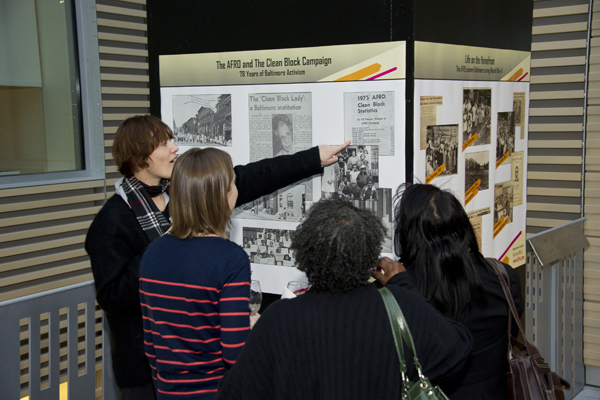 An online database describing the archival materials held by the Afro-American newspaper has been launched. The three-year Johns Hopkins project—administered jointly by the Sheridan Libraries’ Center for Educational Resources and the Krieger School of Arts and Sciences’ Center for Africana Studies—was funded with a $476,000 grant from the Andrew W. Mellon Foundation. The archive’s home is morgue.afro.com/AfroArchon.

“The Afro holds an amazing collection of historical documents and images related to 20th-century African-American history,” said Moira Hinderer, who served as the project manager and is a lecturer in the Center for Africana Studies. “The partnership between the Afro and Johns Hopkins makes these materials more accessible to scholars, students and the public. With photographs of everything from Tuskegee Airmen to civil rights protests to local weddings and graduations, the database has something for everyone interested in history.”

Founded in 1892, the Baltimore-based Afro has been a source for local, national and international news for 120 years. During that time, the newspaper preserved a large number of historical materials, including more than 1 million photographs of African-American life in Baltimore and beyond.

“This newly digitized access provides a wonderful window to an amazing resource base that will significantly enrich our knowledge and understanding not only of our local Baltimore history but also the history of our nation and the wider world,” said Franklin W. Knight, the Leonard and Helen R. Stulman Professor of History and director of the Center for Africana Studies.

Mellon Foundation funding supported the work of organizing and describing the archives of the Afro. Over the course of this project, researchers and interns—including students from Johns Hopkins, Morgan State University and the University of Maryland—uncovered more than 2,000 boxes of materials filled with photographs, newspaper clippings and correspondence. The newspaper’s morgue contains more than 150,000 subject files with clippings, images and correspondence dating back to the 1920s.

Winston Tabb, Sheridan Dean of University Libraries and Museums, said, “This project provides a wonderful model for collaboration among organizations that each, in its own way, is committed to preserving and making accessible a record of the past. It has been a special honor for us at Johns Hopkins to help make better known the remarkable history and achievements of our neighbor, the Afro newspaper. We are all very much looking forward to the next phase of this endeavor.”

With the completion of the electronic archive, the Afro and Johns Hopkins are now beginning an initiative to create online exhibits of its most interesting materials. As with the earlier effort, this project will involve collaboration between staff from the Afro’s archives and Sheridan Libraries and student interns from Johns Hopkins and other area colleges.

A celebration to mark the launch of the online database was held Feb. 22 in the Gilman Hall atrium on the university’s Homewood campus.