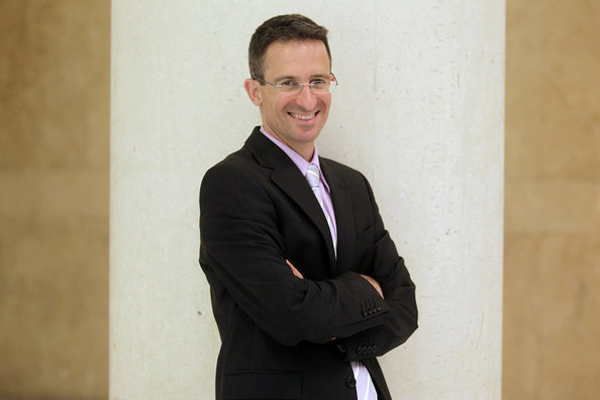 Happiness superstar Tal Ben-Shahar brings his expertise to the Homewood campus, where two positive-psychology courses will be launched in fall 2012.

Tal Ben-Shahar’s Positive Psychology class at Harvard was nothing short of legend. The course, hailed as one of the most popular in the university’s history, drew nearly 900 students per semester. Students rated the class as “life changing”—not an official classification, of course, but one that 30 percent felt compelled to write in on the annual evaluations.

In his lectures, the author and psychologist would offer scientifically based tools for better living—strategies to see the world in a positive light and achieve happiness. His audience doted on each life-affirming word. He was, in effect, the Bruce Springsteen of university lecturers.

Ben-Shahar will share his tips on the pursuit of happiness with the JHU community next week as this year’s speaker for the G. Stanley Hall Distinguished Lecture in Clinical Research. The event, which is open to the public, will be held at 4 p.m. on Tuesday, March 6, in Shriver Hall Auditorium on the Homewood campus. The lecture is co-sponsored by the Office of the President, the Office of the Provost, the Office of Student Life, the JHU Counseling Center, Psi Chi and the Department of Psychological and Brain Sciences.

The happiness won’t begin and end on March 6, however.

Ben-Shahar’s visit to Johns Hopkins kicks off a campuswide happiness effort that centers on the introduction of two new positive-psychology courses inspired by and modeled after Ben-Shahar’s class at Harvard and others at the University of Pennsylvania and the University of Michigan. Leading up to Ben-Shahar’s appearance, more than 1,000 “smiley face” buttons will be passed out and worn on campus by students, staff and faculty.

The two courses will be launched in fall 2012.

Justin Halberda, associate professor and director of undergraduate studies in the Department of Psychological and Brain Sciences at Johns Hopkins, said that the push for Tal Ben-Shahar’s visit and the new courses came out of a grassroots effort led by students working with Clare King in the Counseling Center and the JHU chapter of Psi Chi, the national honor society in psychology.

Halberda, faculty adviser to Psi Chi, said that the students and staff saw the benefits of positive psychology applied to a setting such as Johns Hopkins. The university previously had positive-psychology-focused courses, he said, but not to the scale and structure of Ben-Shahar’s.

Positive psychology, Halberda said, focuses on a person’s strengths and what is working. The discipline offers advice, based on data from experiments, to help alleviate negativity and improve performance, whether it’s in work, sports, class or another realm.

In Ben-Shahar’s course, students broke up into groups of 15 to discuss issues, and they wrote weekly papers in which they reflected on life and how they could change for the better. They were not told to reject sadness or avoid getting upset but rather to reconsider how they deal with disappointment and tragedy and to focus on the positives.

“The course gave them a different set of skills for approaching their time at the university and excelling. The benefits were improved morale and academic success,” he said. “We want to bring this brand of positive psychology to JHU and apply it here.”

The Positive Psychology course is scheduled to take place each subsequent fall after its fall premiere and will be open to both undergraduate and graduate students. The Department of Psychological and Brain Sciences also plans on creating an advanced positive-psychology course for training facilitators.

Jessica Glazer, who served as the head teaching fellow for Ben-Shahar’s class at Harvard, will help guide the development of the positive-psychology courses at Johns Hopkins and will teach the course in the fall. Glazer currently serves as the associate director of programs and education in the Career Services Office of the Johns Hopkins Carey Business School.

“We are immensely excited that Jessica, who has taught the course with Tal at Harvard, has agreed to teach the course here at Johns Hopkins,” he said. “We hope there will be a great response and rival what we’ve witnessed at other schools.”

Susan Boswell, dean of student life, said that a course like this is especially valuable in a high-pressure academic setting such as Johns Hopkins, where life can get competitive and stressful.

“I just think that for our campus, and our community, looking at things in a positive light could make all the difference in the world,” said Boswell, who describes herself as a fan of Ben-Shahar’s books. “We can look at things from two perspectives: glass half empty or glass half full. In positive psychology, it’s about training yourself to see things half full.”

Every year, Psi Chi, in conjunction with the Department of Psychological and Brain Sciences, presents the G. Stanley Hall Lecture series featuring one of today’s leaders in psychology.

Ben-Shahar, an author and lecturer, currently teaches at the Interdisciplinary Center in Herzliya, Israel.

He consults and lectures around the world to executives in multinational corporations, Fortune 500 companies, educational institutions and the general public. His lecture topics include leadership, education, ethics, happiness, self-esteem, resilience, goal setting and mindfulness. He is the author of the international bestsellers Happier (McGraw-Hill, 2007) and Being Happy (McGraw-Hill, 2010), which have been translated into 25 languages. He earned his bachelor’s degree in philosophy and psychology, and his doctorate in organizational behavior, from Harvard.

His visit on March 6 will feature a 50-minute lecture, a workshop, reception and book signing.