New interdisciplinary minor is open to all Homewood undergrads 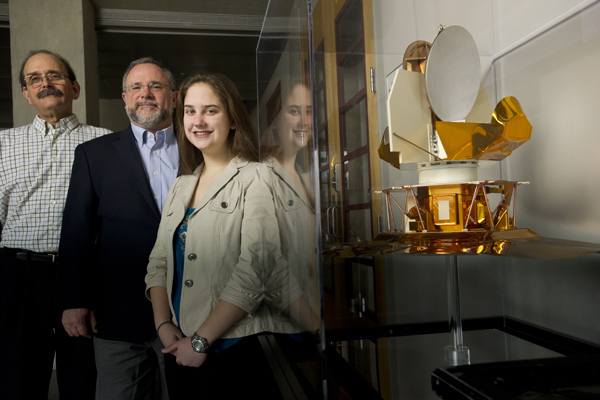 Jessica Noviello is Student No. 1 in a space science and engineering minor co-directed by Joseph Katz, left, and Charles L. Bennett. In the case is a model of NASA’s Wilkinson Microwave Anisotropy Probe spacecraft, a mission for which Bennett serves as principal investigator.

Like most people her age, Jessica Noviello uses Facebook to announce exciting developments in her life. So when the 19-year-old sophomore from Smithtown, N.Y., learned that she had become the first student approved for a new minor course of study at The Johns Hopkins University, she proclaimed it via social media.

“I’ve gotten lots of questions from my fellow students since I announced it on Facebook,” said Noviello, who is double majoring in physics and in Earth and planetary sciences.

Some of her classmates were curious about the new minor’s requirements. But many more wanted to know what a “space minor” even was, and Noviello has since found herself directing interested students to the interdisciplinary program’s two co-directors—Charles L. Bennett, Alumni Centennial Professor of Physics and Astronomy and Johns Hopkins Gilman Scholar, and Joseph Katz, William F. Ward Sr. Distinguished Professor in the Whiting School of Engineering—for more information.

Recently approved by the Homewood Academic Council, the new minor also requires students to work in a space-related internship of some kind (say, at the university’s Applied Physics Laboratory or the nearby Space Telescope Science Institute), which helps them get real-world experience and develop valuable contacts in the field, according to Katz.

“Students here at Johns Hopkins have always been interested in space and aerospace, and have been doing these kinds of things for quite some time, and this minor course of study is a way to formalize and recognize that and help more students take advantage of it,” Katz said.

Open to all students in the Whiting School of Engineering and the Krieger School of Arts and Sciences, the minor requires each student to submit to an adviser a proposal and a course plan that includes five classes of their choice in engineering, physics and astronomy along with an internship, all under the umbrella of an intellectual “theme” that makes sense for their interests and objective. Courses that are requirements for the student’s major may not count toward this new minor.

According to Bennett, this “intellectual theme” can comprise any number of interests, from the design of space missions for remote observations of the Earth and planets to the search for life on other planets. (In fact, the minor’s student handbook includes a long list of suggested programs.)

“The idea is for the students to come to us with their custom-designed program. Then we can sit down and together ensure that their program will get them where they want to go,” Bennett said.

The minor’s keystone course, which every student must take, is Introduction to Space Science and Technology. Taught last fall by H. Warren Moos and Stephen Murray, both research professors in the Henry A. Rowland Department of Physics and Astronomy, this is the course that convinced Noviello that the new space science and engineering minor was designed for her—or, rather, that she wanted to design the minor to suit her own needs.

“Being part of that class made me decide I wanted to learn more. I just became so curious and had too many questions I needed to answer, and the minor will help me do that. I often joke that I’m like a 5-year-old at heart: Dinosaurs and space are my two passions, and now I am living the dream,” said Noviello, who, in her Earth and planetary sciences major, continues to study dinosaurs.

Moos, who led the faculty committee that designed the minor, said, “The goal we sought was to encourage students to utilize the rich educational resources of the university in an interdisciplinary program that would help prepare them for careers in space science and technology. It is exciting to see the first students take advantage of this new minor.”

Katz said he is not surprised that there is “considerable interest” in the minor.

“This is just the beginning, and yes, it will take time for students to hear about the new course of study,” he said, “but space exploration is a very exciting career, and the students know it. This is a great opportunity for our students. Johns Hopkins has always had a very strong presence in medicine, but there also has always been enormous activity in space, and we are now formalizing it and making our presence in it known. That’s a good thing.”