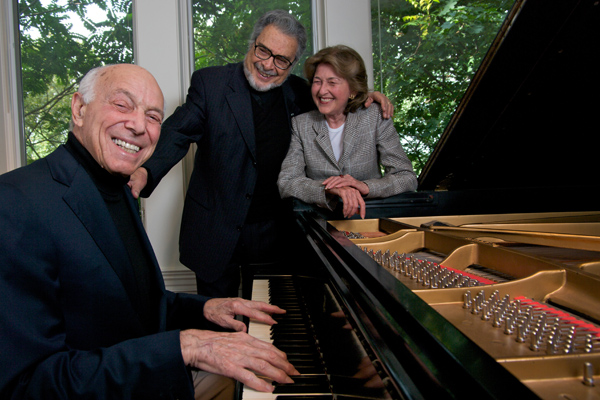 Robert Meyerhoff takes a turn at the keyboard as Leon Fleisher and Rheda Becker look on. Photo: Renee Fischer

Having launched the Leon Fleisher Scholars Fund with a gift of $250,000, Robert E. Meyerhoff and Rheda Becker have now contributed an additional $750,000 to the endowed scholarship fund at Johns Hopkins’ Peabody Conservatory, where Fleisher has taught since 1959. The agreement was signed by the well-known Baltimore philanthropists on Feb. 27.

“This wonderful act of generosity by Bob and Rheda will make the Fleisher Scholars Fund an essential part of our efforts to attract the most promising undergraduate piano students to Baltimore,” said Jeffrey Sharkey, director of the Peabody Institute.

Asked about the impact the donation will have on future students, Fleisher said, “When strewing her seeds of talent among the young, Mother Nature is quite deaf and blind to socioeconomic levels—which renders this gift of such epic generosity all the more meaningful, pertinent and powerful.”

“We hope this gift will raise the profile of Peabody and help the school compete with other top conservatories for the very best piano students worldwide,” Meyerhoff said.

Added Becker, a member of the Peabody National Advisory Council, “We feel so strongly about this because of our respect for Peabody’s tradition of excellence and our admiration for and long-standing friendship with Leon Fleisher, who truly embodies that tradition.”

Fleisher, the Andrew W. Mellon Foundation Chair in Piano, made a legendary series of recordings with George Szell and the Cleveland Orchestra before losing the use of his right hand due to focal dystonia. His recent book, My Nine Lives: A Memoir of Many Careers in Music, written with Washington Post critic Anne Midgette, recounts his rise to fame, his emotional and physical struggles (he eventually was able to perform again with both hands) and the rechanneling of his musical genius into teaching and conducting.

Thanks to an undergraduate matching gift program at Johns Hopkins, the payout of the $1 million gift will be matched in perpetuity. When fully funded, the Meyerhoff-Becker contribution will generate enough income to cover at least two full-tuition scholarships. In addition to this extraordinary donation, 85 other donors have been inspired by Fleisher’s mastery and artistic leadership to contribute a total of $233,918 to the fund, bringing the endowment up to $1,233,918.

With more than 140 undergraduate and graduate students, the Conservatory’s Piano Department, chaired by Boris Slutsky, is Peabody’s largest. It is also among the most prestigious, having turned out such talents as Andre Watts, Alon Goldstein, Awadagin Pratt and Brian Ganz, who is now one of the nine faculty artists.