‘Applause for a Cause’ to benefit Peabody’s Tuned-In program 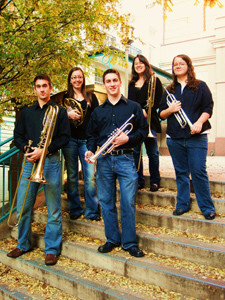 Three student chamber groups from the Peabody Conservatory—Brassivity, Eastern Edge Brass and the Latin American Trio—will perform at An die Musik at 3 p.m. on Sunday, March 11. The concert is a benefit for the Peabody Preparatory’s Tuned-In program, which provides tuition-free lessons, musicianship classes and ensemble experiences for promising students in Baltimore City middle schools. The number of Tuned-In participants has grown in five years from six to more than 60.

Also appearing with his combo will be ninth-grader Keith Davenport, a Preparatory trumpet student in the Tuned-In program. Last fall, Davenport won first place in the “Stars of Tomorrow” segment of Amateur Night at the Apollo’s Super Top Dog! competition in New York.

Tickets to Applause for a Cause, $20 for adults and $10 for students, will be sold at the door and also are available in advance at www.andiemusiklive.com and by calling 410-385-2638. An die Musik is located at 409 N. Charles St. An after-concert party will follow at 5 p.m. at Goodfellas Sports Bar, 336 N. Charles St., with complimentary food and a cash bar. All proceeds will go toward the purchase of musical instruments for Tuned-In students.

For more information, go to www.applauseforacausebaltimore.com.