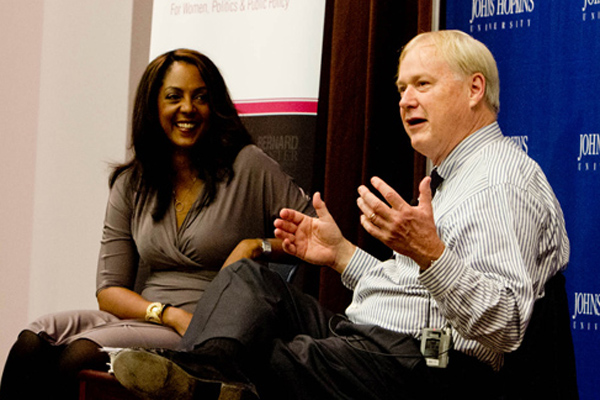 On Monday, Feb. 20, TV personality Chris Matthews, the host of MSNBC’s Hardball With Chris Matthews, visited the university’s Montgomery County Campus for a Q&A with Michelle Bernard, president of the Bernard Center for Women, Politics and Public Policy, an MSNBC political analyst and an instructor in the Osher Lifelong Learning Institute at Johns Hopkins. The event, which was open to Osher members and their guests, drew a packed house of attendees interested in learning more about Matthews’ new book, Jack Kennedy: Elusive Hero, and his thoughts on the 2012 presidential elections.

The 90-minute conversation began with Bernard asking Matthews why he decided to write about Kennedy.

“I wanted to introduce a younger generation of people to JFK,” Matthews said, comparing his task to that of The Great Gatsby’s Nick Carraway when he was trying to convince others to attend Gatsby’s funeral. “And I wanted to capture male regard for male heroes. What makes a man take a bullet for another man? That was the topic I was exploring in this book.”

Matthews and Bernard discussed Kennedy’s role during historic events such as the Cuban Missile Crisis; his personal life, including his unusual relationship with Jackie Kennedy; his personality (“Jack would screw you over in a second, but he’d do it with a smile on his face”); and, finally, the current political climate.

“We were excited and honored to have Chris Matthews and Michelle Bernard as our guests,” said Osher Director Mary Kay Shartle Galotto. “They are both dynamic and knowledgeable, with years of experience and insight into the complexities of the American election process. The chemistry and flow of ideas between them was fantastic.”

The events were part of a daylong program on politics and the 2012 presidential election.

The Osher Lifelong Learning Institute at Johns Hopkins offers retired and semi-retired individuals an array of stimulating noncredit courses, lectures and activities. It holds classes in Baltimore and Columbia and on the Montgomery County Campus, where it currently has more than 600 members.