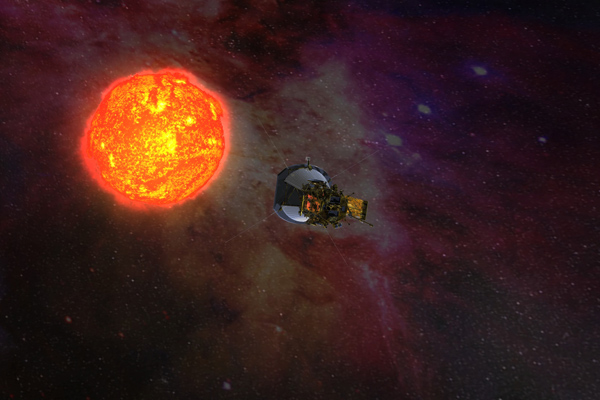 In an artist’s rendering, Solar Probe Plus, with its solar panels folded into the shadows of its protective shield, gathers data on its approach to the sun. Photo: APL

Two-thousand-degree temperatures, supersonic solar particles, intense radiation—all of these await NASA’s Solar Probe Plus during an unprecedented close-up study of the sun.

The team led by the Johns Hopkins University Applied Physics Laboratory—which has been developing the spacecraft for this extreme environment—has been given the nod from NASA to continue design work on the probe, building on the concepts it created during an initial design effort. In NASA mission parlance, the team has moved from Design Phase A to Phase B.

“Solar Probe Plus is an extraordinary mission of exploration, discovery and deep understanding,” said Lika Guhathakurta, the Living with a Star program scientist at NASA headquarters. “We cannot wait to get started with the next phase of development.”

After launch, slated for 2018, Solar Probe Plus will orbit the sun 24 times, gradually moving in toward the sun with each pass. The small car–sized spacecraft will zip through the sun’s atmosphere as close as 4 million miles from our star’s surface, exploring a region—and facing conditions—that no other spacecraft has ever encountered. The probe will include five science investigations specifically designed to solve two key questions of solar physics: Why is the sun’s outer atmosphere so much hotter than the sun’s visible surface, and What accelerates the solar wind that affects Earth and our solar system?

As the spacecraft approaches the sun, its revolutionary carbon-carbon composite heat shield and other components must withstand temperatures exceeding 2,550 degrees Fahrenheit and impacts from hypervelocity dust particles. Its science instruments will survey the most abundant particles in the solar wind—electrons, protons and helium ions—and measure their properties; image the solar wind; measure the electric and magnetic fields, radio emissions and shock waves that course through the sun’s atmospheric plasma; and inventory the elements in the sun’s atmosphere.

The APL team will continue testing and development of the heat shield and other tricky aspects of spacecraft design. For example, engineers will build and test a flightlike active cooling system designed to keep the solar arrays at safe operating temperature throughout the orbit. Most spacecraft parts will be subjected to high-velocity dust tests that simulate the pelting they’ll face flying through swarms of high-energy particles near the sun.

Andrew Driesman, Solar Probe Plus project manager at APL, said, “Solar Probe Plus presents technical challenges like no mission before it. Over the next 26 months, our goal is to get these technologies to the point where we have full-scale prototypes that we can test in a realistic environment.”

Solar Probe Plus is part of NASA’s Living with a Star program, designed to understand aspects of the sun and of Earth’s space environment that affect life and society. The program is managed by NASA’s Goddard Space Flight Center, with oversight from NASA’s Science Mission Directorate’s Heliophysics Division. Johns Hopkins’ Applied Physics Laboratory manages a mission team that includes the University of California, Berkeley; Southwest Research Institute; Smithsonian Astrophysical Observatory; and Naval Research Laboratory. APL will also build and operate the Solar Probe Plus spacecraft.