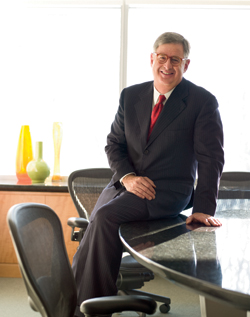 Samuel J. Palmisano, the chairman of the board at computer giant IBM and the company’s former president and CEO, will be the featured speaker at this year’s university commencement ceremony, to be held on Thursday, May 24, on Homewood Field.

Palmisano, a 1973 graduate of Johns Hopkins and a former university trustee, began his career at IBM right after college and rose through the ranks at a business currently listed 18th on the Fortune 500.

Palmisano is perhaps best known for leading the ambitious transformation of a 100-year-old company, and for his vision of how technology and global integration are reshaping business and society. Under his leadership, IBM made tough calls to get out of businesses that IBM itself had invented and enter new ones, leading to growth and innovation.

In January of this year, Palmisano stepped down as IBM CEO, leaving a legacy of record performance despite the global economic crisis. He continues to serve as IBM’s chairman of the board.

“Sam is a daring and visionary leader, whose dedication to discovery and refusal to accept the status quo guided one of the great transformations in business history,” said university President Ronald J. Daniels. “His capacity for bold, creative and critical thinking across domains reflects the power of a Johns Hopkins education. I’m delighted to welcome back one of our own to share his insights as the class of 2012 looks to the future.”

Palmisano joins a distinguished group of Johns Hopkins commencement speakers, a list that has included former Vice President Al Gore; comedian Bill Cosby; Elizabeth Dole, former senator and then president of the American Red Cross; New York City Mayor Michael Bloomberg; Brian Billick, then head coach of the Baltimore Ravens; Sen. John McCain; Nancy Pelosi, speaker of the House at the time; and others from the worlds of politics, sports, media and entertainment.

Palmisano grew up in Baltimore and attended Calvert Hall College High School. At Johns Hopkins, he studied history and played on the offensive line for the Blue Jays football team that he co-captained.

He began his career at IBM in 1973 in Baltimore and took on a series of leadership positions before rising to president and chief operating officer in 2000, CEO in 2002 and chairman of the board in 2003.

He holds an honorary degree of Doctor of Humane Letters from Rensselaer Polytechnic Institute and an honorary fellowship from the London Business School. He received the Atlantic Council’s Distinguished Business Leadership Award in 2009 and the inaugural Deming Cup, presented in 2010 by Columbia Business School’s W. Edwards Deming Center for Quality, Productivity and Competitiveness. He is also an elected member of the American Academy of Arts and Sciences.

Palmisano returned to his alma mater in February 2011 to launch the IBM Centennial Lectures, a yearlong series celebrating the company’s 100th anniversary and focusing on leadership and driving progress in an integrated and increasingly technologically enabled world. To hear the lecture, go to gazette.jhu.edu/2011/02/07/ceo-of-ibm-kicks-off-yearlong-lecture-series-at-his-alma-mater.

Palmisano recently sat down with President Daniels for the spring edition of Johns Hopkins Magazine to talk about higher education, innovation and U.S. global competitiveness. To read the interview or listen to their conversation, go to magazine.jhu.edu/colloquy.

In an effort to promote a more unified Johns Hopkins family, the university in 2010 fused the universitywide commencement ceremony with the Homewood undergraduate diploma ceremony for one grand graduation observance. The result is a single ceremony, at which Palmisano will speak, for graduates from all divisions and campuses.

More information on this year’s commencement ceremony, including a full list of speakers for all university divisional ceremonies, will be posted as it becomes available at www.jhu.edu/commencement.