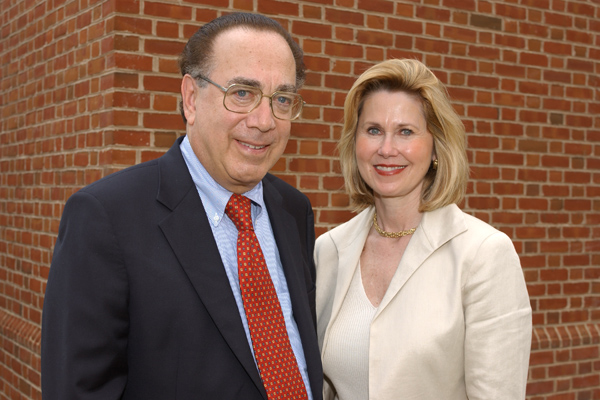 The Johns Hopkins University Zanvyl Krieger School of Arts and Sciences has been named a beneficiary of a charitable trust established by Leslie C. Norins, a 1958 graduate of the School of Arts and Sciences, and his wife, Ann “Rainey” Norins, to fund an endowed student and faculty exchange program in the sciences. The future value of the gift, which will be received after the donors’ deaths, is estimated at approximately $10 million.

The Norins Fund will support reciprocal exchanges of student scientists and junior science faculty members from Johns Hopkins with those at one of Australia’s most prominent bioscience research centers, the Walter and Eliza Hall Institute in Melbourne, from which Norins received his doctorate in immunology.

“This generous gift represents a wonderful investment in the future,” Johns Hopkins University President Ronald J. Daniels said. “It’s an opportunity for scientists from two different institutions and countries to work and learn together in the quest for scientific discovery. Such international partnerships will undoubtedly lead to promising scientific advances on the global stage, and we’re grateful to Dr. and Mrs. Norins for their vision and generosity.”

Norins grew up in Baltimore, where his father, Abe Norins, operated a small tavern. After graduating from Johns Hopkins and then earning a medical degree from Duke University, Norins was awarded an NIH fellowship that took him to the Walter and Eliza Hall Institute, where he was the student of Nobel Prize winner Sir MacFarlane Burnet. Norins returned to the United States to direct a major laboratory at the Centers for Disease Control. During the 10 years he served there, he became a fellow of the Infectious Disease Society of America, published more than 20 peer-reviewed scientific papers and served on committees of the National Institutes of Health and the World Health Organization.

“I have seen the rewards of exposing younger scientists to cross-training at top institutions in other countries,” Norins said. “Not only does it promote exchange of science knowledge and techniques, but it broadens their world outlook in this time of increased globalization. We wanted to enhance such opportunities for future generations of researchers.”

Following his decade in scientific research, Norins embarked on entrepreneurial science and medical publishing ventures that have spanned more than three decades. Often referred to as the “dean of medical newsletter publishing,” Norins has launched more than 80 medical and science newsletters. He was elected to the Hall of Fame of the Newsletter & Electronic Publishers Association, served on its board of directors and has twice been the keynote speaker at its national convention.

Norins credits Johns Hopkins for igniting both his entrepreneurial spirit and his interest in biomedical research, especially immunology.

“As a Hopkins pre-med student, I took as many humanities classes as possible, especially economics,” he said, “and I was fortunate enough to be chosen by the legendary professor of organic chemistry A.H. Corwin to be his student research assistant.”

Katherine S. Newman, the James B. Knapp Dean of the Krieger School, says that the Norinses’ gift will forge new ground in the exchange of scientific research and discovery.

“Our students and junior faculty benefit enormously from the opportunity to share research discoveries with their colleagues in world-class institutions overseas,” she said. “Exchanges that build durable relations and collaborative science are especially valuable, but often costly. This gift will make it possible to sustain these partnerships for the long run, and hence we are all deeply grateful to the Norins family for their vision and generosity.”

Norins said that he and his wife, who now live in Naples, Fla., are pleased they are able to plan future support for a collaborative effort between two of the “top-drawer bioscience research centers in the world.”

“We feel we have made a wise investment arrangement for the future,” Norins said. “We are paying back, in some small fashion, the many ways Johns Hopkins and the WEHI have aided the formative years of my career.”