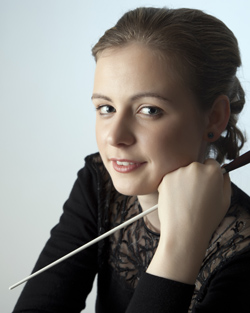 The Lunar Ensemble, a contemporary chamber group conducted by Peabody Conservatory alumna Gemma New and featuring Peabody musicians, will premiere five works during its performance at Baltimore’s An die Musik at 8 p.m. on Tuesday, March 13.

“It’s a real treat to be performing brand-new works by composers whom the Lunar Ensemble knows well and admires,” said the New Zealand–born New, who is assistant conductor of the New Jersey Symphony Orchestra. “Each piece on the program brings us a view of the present day, portrayed through the unique sound world of each composer. We are especially thrilled that most of these composers are affiliated with the Peabody Institute.”

On the program are five works by Peabody-affiliated composers, one by Pulitzer Prize–winning composer John Harbison and one by Los Angeles–based composer Michael Kibbe.

Number Forty-Seven, by Paul Mathews, associate dean for academic affairs and a Music Theory faculty member at Peabody, refers to the 47th poem from Pierrot lunaire, one of the 29 that Arnold Schoenberg did not set. David Smooke, who chairs the school’s Music Theory Department, wrote Hazmats for the California E.A.R. Unite to perform at Arcosanti in the high Arizona desert.

Singapore native Emily Koh, who earned her master of music degree in composition at Peabody, named her piece, frigia, after the ultra-modern ice kingdom in the Flash Gordon comic series. The Indian-influenced piece The Soul, Like the Moon, by Jake Runestad, another Peabody master of music graduate, was inspired by the 14th-century Sufi poet Lalla. Alumnus Michael Sheppard, who studied piano with Leon Fleisher and Ann Schein, will perform his own composition, Mad World Fantasy.

Kibbe’s Death in the Backyard is a setting of a poem by Roger Anderson, his late brother-in-law. The work by Harbison, a student of noted composers Walter Piston and Roger Sessions, is The Mirabai Songs. These settings of poems to Krishna by 16th-century Indian poet Mirabai will be performed by soprano Lisa Perry, who received her master of music degree from Peabody in 2011, and pianist John Wilson, a current master of music candidate.