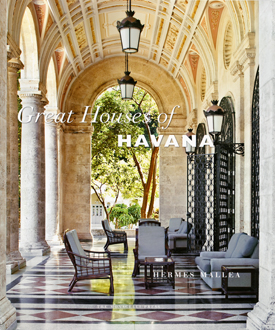 The House Beautiful—a series of illustrated talks by notable experts and authors in the fields of architecture, artistic design and decorative arts, presented by Johns Hopkins’ Evergreen Museum & Library—returns for a fifth season to the intimate, whimsical setting of the museum’s Leon Bakst–designed private theater, with lectures exploring the uses of nationalism in design.

Following each of the lectures, which take place on three Wednesdays, a reception will be held in the museum’s Far East Room gallery, where audience members will have the opportunity to meet with the speaker.

The three events are as follows:

Hermes Mallea: “Great Houses of
Havana: A Century of Cuban Style,” Wednesday, March 28. For more than 400 years, Havana was the center of Spanish trade in the Western Hemisphere. With the expansion of the sugar industry, independence from Spain and North American investment, Havana became a city of great wealth, great style and great houses. Architect and author Hermes Mallea will explore the greatest residences of Havana and the 100 years of creativity, design and style that made the city “the Paris of the Caribbean.” Mallea is an architect and partner in M(Group), a New York design firm. A Cuban-American expert in residential design, he is the author of the recently published book Great Houses of Havana: A Century of Cuban Style (The Monacelli Press, November 2011). Mallea will sign copies of his book following the talk.

John J. Tackett: “A Devotion to Classicism: The Enduring Popularity in Decorative Arts,” Wednesday, April 25. The classical theme has continued in not only architecture but gardens, furniture, ceramics, textiles and many more elements of residential design. Presenting modern examples informed by a tradition 2,000 years old, architect and interior designer John J. Tackett will discuss why classicism endures as a major source of residential inspiration. Tackett worked for the legendary firm Parish-Hadley before forming John Tackett Design in 1987. His work has been published in Architectural Digest, Southern Accents, House & Garden, House Beautiful and more than a dozen books on architecture and design. He is author of the award-winning blog The Devoted Classicist.

Donald Albrecht: “The American Style: Colonial Revival and the Modern Metropolis,” Wednesday, May 16. Throughout American history, no style has proved more enduring than Colonial Revival, which emerged in the late 19th century. Powerfully connecting the present to the past, Colonial Revival remains popular today, retaining its status as the most distinguishing American style. Donald Albrecht, curator of architecture and design at the Museum of the City of New York, will look at Colonial Revival from a national perspective and examine the movement’s impact on New York City, the ultimate modern metropolis. Albrecht has curated exhibitions that have ranged from profiles of design firms and artists to overviews of cultural trends, including last year’s critically acclaimed The American Style: Colonial Revival and the Modern Metropolis. Albrecht will sign copies of the exhibition catalog following his talk.

The 2012 House Beautiful lecture series is made possible by the Evergreen House Foundation.