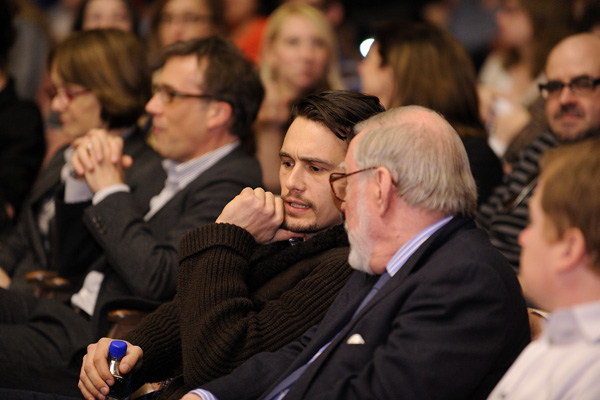 Actor James Franco attended a screening and discussion of his film The Broken Tower about the life and work of the poet Hart Crane on March 9 at Homewood’s Shriver Hall.
The 90-minute film was introduced by the actor and was followed by a panel discussion featuring Franco; John Irwin, Decker Professor in the Humanities and author of the recently published Hart Crane’s Poetry; and Linda DeLibero, director of the Program in Film and Media Studies.

The event was sponsored by The Writing Seminars, Film and Media Studies and the JHU Press, which published Hart Crane’s Poetry.

Shot in black and white, and completed in 2011, The Broken Tower is based on the biography of Crane by Paul Mariani. Franco wrote the screenplay while studying at New York University’s Tisch School of the Arts and later decided to produce, direct, edit and star in the film. It premiered last year at Boston College, where Mariani teaches, and was shown at the 2011 Los Angeles Film Festival. A theatrical release is planned for sometime in 2012.