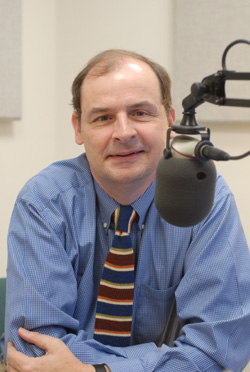 In his monthly ‘Public Health: On the Inside’ podcast series, Thomas Burke aims to entertain while educating listeners and demystifying the field of public health. Image courtesy Bloomberg School of Public Health

Burke, associate dean for public health practice and training at the Bloomberg School of Public Health, lauds the pair’s down-home, tongue-in-cheek style that amuses while it informs.

“I think in some ways that the power of listening has been lost, so it was with envy that I became a fan of Click and Clack, where they can take something as mundane as a car with worn-out wheel bearings and turn it into something everybody loves to listen to,” Burke says. “I’m like, this is so great. Why can’t we in public health do the same thing?”

He imagined a format where he could discuss topics such as disease outbreaks, water pollution and obesity the same way a sports-radio personality can break down March Madness and Tim Tebow.

In June Burke launched what he dubs phase one of his vision in the form of a monthly podcast show called Public Health: On the Inside

The podcast series, which he describes as a blend of Car Talk and the Bravo channel’s Inside the Actors Studio, offers an insider’s look at the world of public health practice, and takes listeners to the frontlines to meet interesting people working in the field. Each episode starts off with an NPR-esque piano intro that segues into Burke’s deep and smooth radio-friendly voice.

The show kicked off with an episode called “Disease Detective” in which Burke spoke with Bloomberg School alum Tala Fakhouri, who is currently working with the U.S. Epidemic Intelligence Service.

The following month, Burke talked with veterinarian, journalist and Bloomberg School alum Monica Murphy, who has traveled the world to pursue her passion for public health and particular interest in rabies. In Burke’s setup to the discussion, he divulges that he used to be a dogcatcher in a previous life.

Murphy, a former student of Burke’s who phoned in for the podcast, talks about the route she took in her career and how she researched her book, Rabid: A Cultural History of the World’s Most Diabolical Virus, due out later this year.

In between educational tidbits, such as the fact that 99 percent of rabies cases worldwide are from dogs, Burke interjects some perspective and humor, such as sharing an anecdote about the raccoon epidemic in his native New Jersey. Burke said that he and his fellow public health officials quipped that the animals, especially the rabid ones, must have swum across the Delaware River from the Pennsylvania side.

In the following month’s podcast, Burke injects some levity when Suzanne Condon, associate commissioner of the Massachusetts Department of Public Health, veers off into jargon territory when discussing the high concentration of microbes that kept beaches closed one summer. “I told her that in New Jersey, we call that poop in the water,” he says. “Just like when I teach, humor is an important ingredient.”

In September, Joshua Sharfstein, secretary of the Maryland Department of Health and Mental Hygiene, recorded a podcast with Burke to discuss public health at the city, state and national levels.

Other topics in the series have been alcohol-related public policy, health disparities and the arsenic in fruit juices scare that made headlines and was featured on the Dr. Oz Show. For the arsenic episode, titled “The Poison That Lurks in Juice,” he brought in experts Keeve Nachman and Michael Crupain to talk about the challenges in communicating such controversial findings.

Last month’s podcast was recorded in Barcelona with participants in the Johns Hopkins Fall Institute in Health Policy and Management, where Burke teaches.

Burke, a professor in the Department of Health Policy and Management, has spent years studying the development of new approaches to environmental health surveillance, and the application of health risk assessment to public policy. He was principal investigator for the Pew Environmental Health Commission that established the framework for a national approach to environmental public health tracking.

Before his appointment at Johns Hopkins, he was deputy commissioner of health for New Jersey and director of the Office of Science and Research in the state’s Department of Environmental Protection.

Burke said that with the podcasts, he wants listeners to learn about various public health–related issues and careers, and, in general, to demystify the field.

“Almost universally, people don’t know about public health until college or graduate school. They hear about doctors and medical school, but they are much more influenced by public health than they realize, whether it’s related to food, water or outbreaks of diseases,” he says. “Working in public health, there are amazingly challenging things, but nestled within these stories are fascinating aspects of human nature, like why it’s so scary to close the beaches and what happens when an entire school population gets diarrhea.”

He says that a podcast is the perfect medium for telling these stories.

“I’ve listened to the radio since the time I was a kid growing up in Jersey City,” he says. “I remember the great American storyteller Jean Shepherd, who had a show on New York radio. He would just tell stories, and I thought it was wonderful. That’s what I’m trying to do here.”

His target audiences are students interested in public health as a field and members of the general public who want to find out more about topics that matter to them.

The next Public Health: On the Inside podcast will feature Alfredo Palacio, the former president of Ecuador, who previously served as that nation’s minister of health.

In future podcasts, Burke hopes to integrate video, still images and sound effects. He also wants to launch the series on iTunes.

The future episodes will be recorded in the school’s new Multimedia Studio, which was completed this month. The facility features four studio spaces that will be used for activities such as Burke’s podcasts, videos and distance learning.

Burke says that he also might take his show on the road, recording some installments remotely.

He says that he wants the podcasts to remain timely but not lose focus on the people behind the scenes, the public health practitioners he calls “the coolest people on earth.”

“I will ask them about their scariest moments, the coolest parts of their job so that the listener can learn what makes these people tick. It takes real courage to do what they do, like go into an outbreak area or a chemical waste site,” he says. “Some are fascinated by the medical side, some by the personal, human side. But no matter how we approach it, this job can be incredibly rewarding when things go right.”

To listen to the podcast series, go to www.jhsph.edu/podcast.