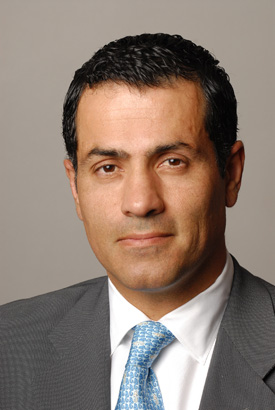 Nasr, 51, will join SAIS on July 1. He will be its eighth dean, succeeding Jessica P. Einhorn, who is retiring after a decade in the post.

Nasr has been a professor of international politics at Tufts University’s Fletcher School of Law and Diplomacy since 2007. He is a senior fellow of the Brookings Institution and a member of the U.S. State Department’s Foreign Policy Advisory Board. For two years, from 2009 until last year, he also served as special adviser to Richard Holbrooke, who was then the president’s special representative for Afghanistan and Pakistan.

“Vali Nasr is a distinguished scholar and teacher, an adept policy analyst and adviser, a highly regarded public intellectual and an accomplished administrator,” said Ronald J. Daniels, president of Johns Hopkins, who recommended the appointment to the executive committee of the university’s board of trustees.

“I have been as impressed with Vali’s warmth and humility as with his intellect, vision and accomplishments,” Daniels said. “He has an excellent understanding of the challenges facing graduate schools of international studies, including SAIS, and an appreciation for the opportunities ahead. He is superbly qualified to meet those challenges and seize those opportunities.”

SAIS was founded in Washington, D.C., in 1943 to prepare students to assume major responsibility in the postwar world. It became a part of Johns Hopkins in 1950 and now has additional campuses in Bologna, Italy, and Nanjing, China. Its nearly 1,000 students across the three locations benefit from the school’s emphasis on diverse knowledge and skill sets in core disciplines, such as strategic studies and international development, international economics, regional study and foreign language training.

Among SAIS’ unique assets, Nasr said, are its global reputation and worldwide locations, its distinguished faculty and its tradition of providing students with both the theoretical insight and practical tools they need to be leaders in the study and practice of international relations.

“This is an important and turbulent time in global affairs,” Nasr said. “The nature and focus of education in international affairs are changing as global challenges require innovative approaches, greater attention to technology and addressing new demands in the job market. SAIS has a very important leadership role to play in shaping the future of education in international affairs.”

Nasr is a leading scholar on the politics of the Middle East and the Muslim world, and on foreign policy. His two most recent books, The Shia Revival and Forces of Fortune, foresaw, respectively, postwar sectarian violence in Iraq and the uprisings that have become known as the Arab Spring. The books contributed to U.S. policy formulated in response to those events.

Nasr has advised or presented briefings to presidents and vice presidents, senior cabinet secretaries of both parties, congressional committees, the chairman of the Joint Chiefs of Staff and other military leaders, and presidential campaigns.

He is a columnist for Bloomberg View and has contributed to The New York Times, The Washington Post, Foreign Policy, Foreign Affairs and other publications. He has been widely interviewed on Middle East issues and has appeared on CNN, NBC, NPR and PBS. He has been a guest on The Daily Show and The Colbert Report. His Twitter feed on foreign affairs issues is @vali_nasr.

At Tufts, Nasr is associate director of the Fares Center for Eastern Mediterranean Studies and has worked closely with the president and provost on universitywide initiatives and on the university’s global presence. He also has collaborated with the dean and other Fletcher School leaders on strategic vision, academic programs and fundraising. He is serving now as chair of a universitywide committee to identify Tufts’ next provost.

“Vali has been a valued member of the Fletcher and Tufts community, first as a student and then as part of our faculty,” said Stephen W. Bosworth, dean of the Fletcher School at Tufts. “He is an admired and prolific scholar and spokesperson on matters of public policy. He is also a truly excellent teacher. We will miss him, but we will take pride in his ongoing success.”

Nasr has served as a fellow at Harvard’s Kennedy School of Government, and on the faculties of the Naval Postgraduate School, Stanford University, the University of California, San Diego and the University of San Diego. The Tehran-born immigrant is a 2011 recipient of the Ellis Island Medal of Honor. He has also been a Carnegie Scholar and is a life member of the Council on Foreign Relations.

Nasr is married to Darya Nasr, a technology executive, and has three children, sons Amir and Hossein, and daughter Donia.