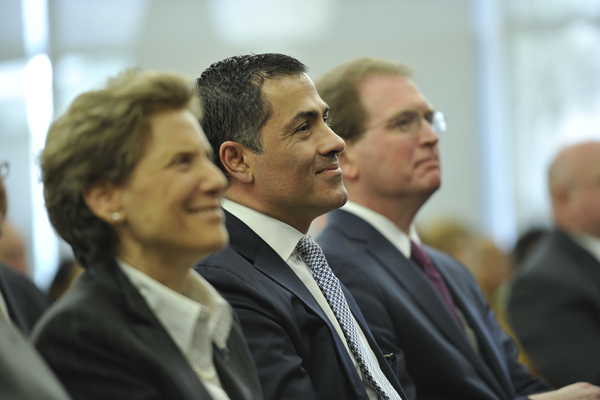 Vali Nasr leads something of a double life. Triple, actually.

There is Nasr the academic, a highly regarded teacher and scholar on Iran, the Middle East and the Islamic world. He has written eight books and played a leadership role on the school and university levels.

And there is Nasr the counselor, consulted on foreign policy by Democratic and Republican administrations and by Congress, candidates, the military and federal agencies.

And then there is Nasr the public intellectual, who tweets to more than 12,000 followers and contributes to The New York Times, The Washington Post, Foreign Policy and Foreign Affairs. He has appeared on CNN, NBC, NPR and PBS. He has been on The Daily Show With Jon Stewart and The Colbert Report.

“The main challenge is to be able to bring knowledge of academic research to practitioners and the American public,” he says, “to enrich the discussion of energy policy, the Middle East, China and the global economy. To make available to those who make critical decisions the knowledge they need to make those decisions.

“Some of this,” he adds, “we do in the classroom and some through reaching out to policymakers and the broader public. SAIS—given its location, history, mission and faculty—is very well-positioned to perform just this kind of service.”

Nasr, 51, will join SAIS on July 1, succeeding Jessica P. Einhorn, who is retiring after a decade in the post. He has been a professor of international politics at Tufts University’s Fletcher School of Law and Diplomacy since 2007 and is a senior fellow of the Brookings Institution. He sits on the State Department’s Foreign Policy Advisory Board. For two years, while on a partial leave from Tufts, he was special adviser to the president’s special representative for Afghanistan and Pakistan.

SAIS, too, has that sort of “foot-in-both-worlds” stance, and that’s part of what makes a SAIS education so valuable to students, at both the master’s and doctoral levels, he says. The school was founded in Washington, D.C., in 1943 to prepare students for major responsibility in the postwar world. It became a part of Johns Hopkins in 1950 and now has nearly 1,000 students in Washington and at campuses in Bologna, Italy, and Nanjing, China.

“SAIS is unique in that its academic mission straddles the boundaries of intellectual discourse and the professional world,” Nasr says. “It’s the bridge that connects knowledge at a theoretical level in economics, foreign policy and regional studies to the practical work of the people who make policy and manage world issues. SAIS students get both theoretical knowledge and practical knowledge. And SAIS equips them with the tools to use both and use them well.”

University President Ronald J. Daniels, who recommended Nasr’s appointment to the executive committee of the board of trustees, says that he has been “as impressed with Vali’s warmth and humility as with his intellect, vision and accomplishments.”

“Vali has a keen appreciation for the pressing issues facing graduate education in international studies today—and what a SAIS education brings to bear on the complex world in which we live,” said Minor, who chaired the search. “No one is better suited to position SAIS to meet the opportunities and seize the opportunities that lay ahead.”

Nasr’s two most recent books, The Shia Revival and Forces of Fortune, foresaw, respectively, postwar sectarian violence in Iraq and the uprisings that have become known as the Arab Spring. The books contributed to U.S. policy formulated in response to those events.

“This is an important and turbulent time in global affairs,” Nasr says. “The nature and focus of education in international affairs are changing as global challenges require innovative approaches, greater attention to technology and addressing new demands in the job market. SAIS has a very important leadership role to play in shaping the future of education in international affairs.”

At Tufts, Nasr has been associate director of the Fares Center for Eastern Mediterranean Studies and has worked closely with the president and provost on universitywide initiatives and on the university’s global presence. He also has collaborated with Fletcher School leaders on strategic vision, academic programs and fundraising. He is serving now as chair of a universitywide committee to identify Tufts’ next provost.

“Vali has been a valued member of the Fletcher and Tufts community, first as a student and then as part of our faculty,” says Stephen W. Bosworth, dean of the Fletcher School. “He is an admired and prolific scholar and spokesperson on matters of public policy. He is also a truly excellent teacher. We will miss him, but we will take pride in his ongoing success.”

The Tehran-born Nasr is a 2011 recipient of the Ellis Island Medal of Honor. He also has been a Carnegie Scholar and is a life member of the Council on Foreign Relations.

Nasr is married to Darya Nasr, a technology executive, and has three children, sons Amir and Hossein, and daughter Donia.