Friends of the Library 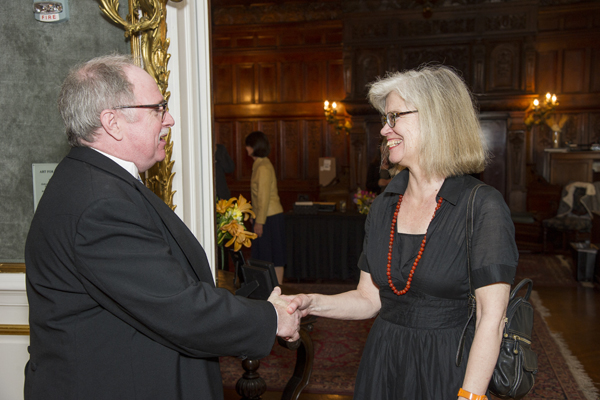 More than 75 Friends of the Libraries gathered on April 4 at the Garrett-Jacobs Mansion to celebrate the 80th anniversary of the group’s founding. Henry Barton Jacobs (played by actor Mark Squirek), who served on the faculty of the Johns Hopkins School of Medicine and was the inaugural president of the Friends, was “on hand” to welcome guests to his home. The event included displays of materials from the past 80 years, including rare books from early collections given to Johns Hopkins Libraries. Among them is an 1876 edition of Walt Whitman’s ‘Leaves of Grass’ inscribed by the author, published the year of the university’s founding. Former presidents of the Friends, dating back to the 1980s, joined in the celebration, as did local authors and members of Baltimore’s literary community. Above, Henry Barton Jacobs greets Jean McGarry, professor and co-chair of The Writing Seminars.