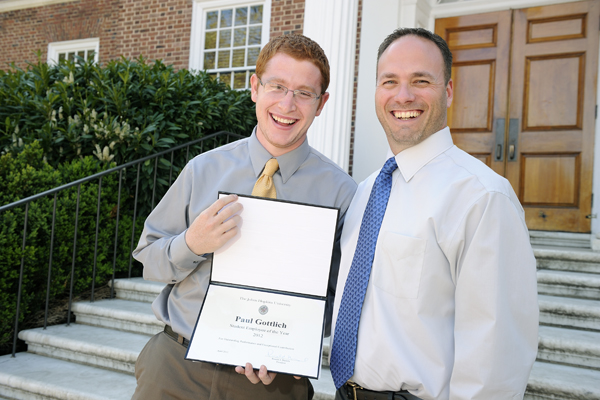 Paul Jacobus and the Gottlich family go way back—to 1999, to be precise. Jacobus, a property manager at Homewood campus, supervised JHU undergraduate Andrea Gottlich and later, her brothers Jeremy and Paul. Jacobus first glimpsed Paul, then age 9, in a photo Andrea showed him at work one day. “Here was this red-headed kid with hair all over the place lying on a couch,” Jacobus recalled.

That 9-year-old kid will graduate from Johns Hopkins next month, ending a 12-year run that a Gottlich family member has worked under Jacobus.  “It’s the end of an era,” he said.

The era ends on a high note.

On Wednesday, Gottlich was named JHU Student Employee of the Year at a ceremony held in the Glass Pavilion on the Homewood campus.

Forty students were nominated for the award, now in its 20th year. A panel of judges reads and ranks each nomination.

The ceremony was part of National Student Employee Appreciation Week, which aims to enhance awareness of student employment and the important role it plays in higher education.

Gottlich, a senior majoring in international studies, spent all four of his years at Johns Hopkins working in the Department of Building Operations and Maintenance as a building manager for Mason, Garland and Shriver halls. In his nomination form, Jacobus wrote, “No one possesses more motivation, determination or desire than Paul; he will be a great asset in the future to whoever is lucky enough to work with him.”

Gottlich received $750 from Student Employment Services, a JHU pen-and-pencil set from the President’s Office and a certificate of recognition signed by President Ron Daniels. He is now in the running for the Tri-State (Maryland, Delaware and Washington, D.C.) Student Employee of the Year competition, the winner of which will be announced later this week.

Kerry Best, a senior biology major, was co-winner of second place, receiving nominations from faculty and staff in both the Department of Geography and Environmental Engineering and the Department of Biophysics. Best holds a student job in each department. Tied with him was graduate student Nicole Errett, a research assistant in Health Policy and Management at the School of Public Health.

The event also recognizes a Student Supervisor of the Year, an award that went this year to Jessica Swadow, an administrative coordinator in the Whiting School of Engineering’s Academic Affairs Office. Swadow received dinner for two at Gertrude’s and a signed certificate of recognition from President Daniels.

The second-place prize went to Jacobus, his eighth nomination for the award.

Gottlich, who nominated Jacobus, said that he couldn’t imagine a greater work environment and supervisor.

“Paul’s been a great boss and mentor, and a great friend,” Gottlich said. “He gets the best out of everyone and cares so much about his student employees. Everyone who works for him works extremely hard, and that’s all due to Paul.”

Gottlich attended the ceremony with his family, including his mother, Hillary, a student accounts coordinator for Homewood Student Affairs.

Students at all Johns Hopkins campuses are eligible to be nominated. Currently, some 4,100 Homewood students are employed throughout the Johns Hopkins enterprise.