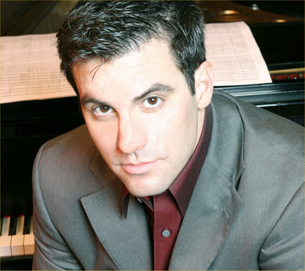 The opera Silent Night begins in an opera house, where a duet is being sung in German by a man and a woman in 18th-century costume. But this isn’t a work by Mozart; it’s a passage written by Kevin Puts in the style of Mozart, soon to be stopped short by an announcement that Germany is at war.

On April 16, Columbia University released the list of winners of the 96th annual Pulitzer Prizes, which it administers, and the winner of the Pulitzer in music was Puts, a member of the Peabody Conservatory’s Composition Department since 2006, for Silent Night.

Inspired by the film Joyeux Noel, which tells the story of a Christmastime ceasefire during World War I, the two-act opera—Puts’ first—was commissioned by Minnesota Opera and premiered last November. The librettist was Mark Campbell.

“Kevin Puts joins a distinguished company of Pulitzer Prize winners, including Aaron Copland in 1945 for Appalachian Spring and Peabody alumnus Dominick Argento in 1975 for From the Diary of Virginia Woolf,” said Jeffrey Sharkey, director of the Peabody Institute. “We are all delighted with this latest addition to the remarkable history of Peabody’s Composition Department, where Pulitzer winner Elliott Carter and many other leading composers have taught. That Kevin and his faculty colleagues are continuing this tradition of creative excellence is a source of great pride.”

Born in St. Louis, 40-year-old Puts attended high school in Michigan and earned his Bachelor of Music and Doctor of Music Arts degrees from the University of Rochester’s Eastman School of Music. His Master of Music degree is from Yale. He now lives in Yonkers, N.Y., with his wife, a violinist with the New York Philharmonic, and their son.

Silent Night will be presented next February by the Opera Company of Philadelphia at the Academy of Music.

Puts’ music will be heard in Maryland later this spring, when Marin Alsop conducts performances by the Baltimore Symphony Orchestra of his Symphony No. 4, From Mission San Juan Bautista (June 7, 8 and 10 at the Meyerhoff in Baltimore and June 9 at Strathmore in North Bethesda).