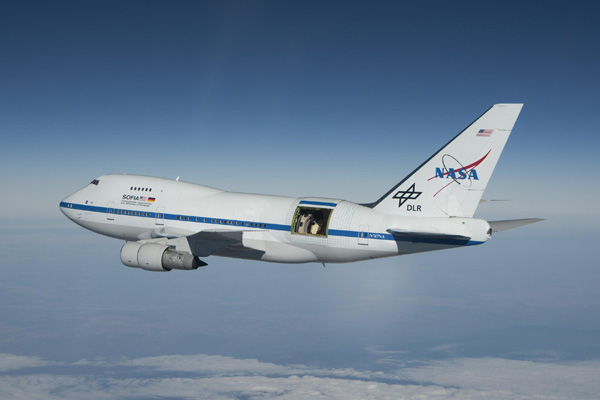 A proposal led by a Johns Hopkins University astrophysicist has been selected by NASA as part of a science instrument upgrade to the Stratospheric Observatory for Infrared Astronomy, known as SOFIA.

The instrument, the High-resolution Airborne Wideband Camera, will provide sensitive, versatile and powerful imaging capability to the SOFIA user community. The Johns Hopkins–led investigation is one of two that will allow SOFIA, with the enhanced HAWC, to measure the structure and strength of magnetic fields in diverse objects throughout the universe, such as star-forming clouds and galaxies. This will help astronomers better understand how stars, planets and galaxies form and evolve.

Johannes Staguhn, a research scientist in the Center for Astrophysical Sciences in Johns Hopkins’ Henry A. Rowland Department of Physics and Astronomy, will lead a team to provide sensitive large-format detector arrays to increase HAWC’s capability and observing efficiency, allowing a broader range of scientific investigations. Other instrument team members include NASA’s Goddard Space Flight Center.

“The role of magnetic fields in the process of star formation and the associated formation of planets is still far from being understood,” Staguhn said. “The instrument upgrade will provide for the first time the capability for the SOFIA observatory to measure magnetic fields on large scales in molecular clouds.”

These observations, he said, will be more detailed than those that have been possible with any other existing observatory. Molecular clouds are the “cradle” for new stars and planets that form out of cloud material that collapses into new solar systems, and magnetic fields are believed to play a major role in this process.

“The HAWC detector upgrade, together with optics that are sensitive to the polarization of the observed light, and will be provided by the second proposal that has been selected, will enable the measurement of these magnetic fields and their interplay with the molecular cloud,” Staguhn said. “These observations will provide new and essential insights into the processes that are involved in the creation of new worlds.”

SOFIA is a highly modified Boeing 747SP aircraft that carries a telescope with a 106-inch-diameter reflecting mirror that conducts astronomy research not possible with ground-based telescopes. By operating in the stratosphere at altitudes up to 45,000 feet, SOFIA can make observations above the obscuring water vapor in Earth’s lower atmosphere.

In August, the agency released an announcement of opportunity for SOFIA second-generation instrument investigations and received 11 proposals. Those selected were judged to have the best science value and feasible development plans.

The other proposal selected is the High-resolution Airborne Wideband Camera Polarization, or HAWC-Pol, to be led by C. Darren Dowell of NASA’s Jet Propulsion Laboratory in Pasadena, Calif. This investigation upgrades the HAWC instrument to include the capability to make polarimetric observations at far-infrared wavelengths.

Dowell will be the principal investigator for the full HAWC upgrade effort. The investigation’s main goals are to measure the magnetic field in the interstellar medium, star-forming regions and the center of the Milky Way.

A joint project of NASA and the German Aerospace Center, SOFIA is based and managed at NASA’s Dryden Aircraft Operations Facility in Palmdale, Calif. NASA’s Ames Research Center at Moffett Field, Calif., manages the science and mission operations in cooperation with the Universities Space Research Association, headquartered in Columbia, Md., and the German SOFIA Institute at the University of Stuttgart.