Update: University flips the ‘on’ switch of large solar project 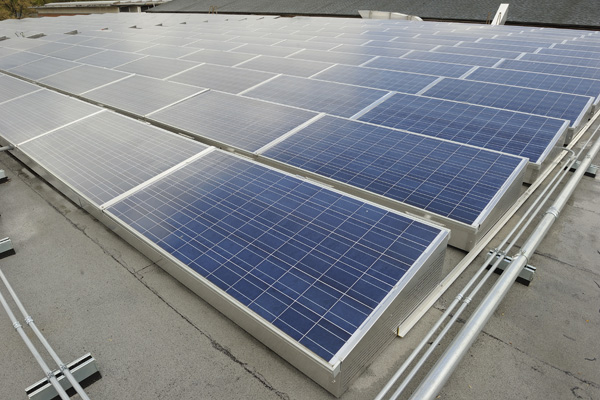 As part of its ongoing efforts to shrink its carbon footprint, The Johns Hopkins University has installed more than 2,900 solar panels on seven buildings in three locations: the Homewood and East Baltimore campuses and Johns Hopkins at Eastern.

The solar panels are expected to produce 997,400 kilowatt-hours of electricity each year while reducing the university’s out-put of greenhouse gases by 1.2 million pounds annually. Over the course of one year, the system will produce as much electricity as would be consumed by 34 average homes.

Led by members of the university’s Sustainability Network, including staff from the School of Medicine, the Bloomberg School of Public Health, Homewood Facilities and the Office of Sustainability, the initiative is a partnership with leading solar energy development companies Eastlight Renewable Ventures and RGS Energy.

This partnership allows the university to lease out the roof space for the panels in exchange for the capital financing and installation of the system. Johns Hopkins in turn buys the output from the panels at a cost that is slightly less than current BGE prices. The university is still a BGE customer, however; all its buildings are connected to the local utility company, relying on it for its nighttime power needs, and on cloudy days when there is no solar energy to collect. Conversely, if Johns Hopkins’ solar panels generate a surplus of energy, it is returned to the BGE power grid for distribution to other customers.

On the Homewood campus, the panels are installed on the rooftops of the Newton H. White Athletic Center and the Mattin Center. On the East Baltimore campus, the buildings outfitted with the panels are the School of Nursing’s Anne M. Pinkard Building; 2024 E. Monument St.; the Bloomberg School of Public Health’s main building, at 615 N. Wolfe Street; and Hampton House, 614 N. Broadway. The building with the most panels is the athletic center, followed by Johns Hopkins at Eastern. A computer system monitors the network of panels, and the real-time output of electricity can be viewed at Deck Monitoring.

The panels were engineered and installed by regional contractors, adding approximately $2 million in wages to the local economy. The project also contributes to Baltimore City’s sustainability goal of reducing its greenhouse gas emissions by 15 percent by 2015, according to its sustainability plan, adopted in 2009.

The solar panels are among several endeavors under way at Johns Hopkins as part of a broad multifaceted Implementation Plan for Advancing Sustainability and Climate Stewardship, launched in May 2010. The plan encompasses research, education and community outreach in addition to greenhouse gas reduction. The idea is to incorporate efficiency, new technologies, behavioral change and renewable energy resources into as many aspects of daily university life as possible, according to Davis Bookhart, director of the Office of Sustainability.

Sustainability coordinator Leana Houser, who oversees the program, says her philosophy is that at Johns Hopkins, “every job is a green job.”

“Every day, each of us has the opportunity to make smart and sustainable decisions that reduce the environmental impact of our work,” Houser said.

Johns Hopkins was recently included in the Princeton Review Guide to 322 Green Colleges: 2012 Edition, which profiles higher education institutions in the United States and Canada that demonstrate a strong commitment to sustainability in their academic offerings, campus infrastructure, activities and career preparation.