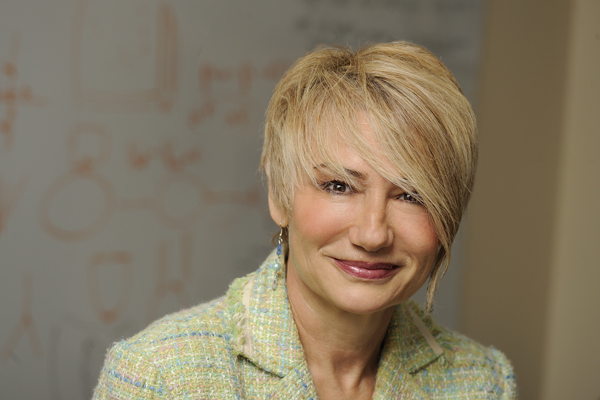 The Johns Hopkins University Department of Biomedical Engineering, consistently ranked as the nation’s leading program in this discipline, celebrated its 50th anniversary on May 4 with a daylong symposium that included the installation of Natalia Trayanova as the inaugural Murray B. Sachs Professor.

“This occasion not only recognizes Murray and Natalia, two accomplished members of our faculty, but also the legacy of our entire Biomedical Engineering Department and the collaboration between the engineering and medical schools,” said Nicholas P. Jones, the Benjamin T. Rome Dean of the Whiting School of Engineering.

The Department of Biomedical Engineering, founded in its earliest incarnation as a division in 1962, was established as an outgrowth of promising cross-collaborative research that began in the 1930s. That early work led to the invention of the first cardiac defibrillator by electrical engineer and School of Engineering Dean William B. Kouwenhoven.

Murray B. Sachs was one of the formal department’s first hires, in 1970, and he went on to serve as director from 1991 to 2007. In those early years, Sachs and colleagues set out to understand how the brain processes sounds, including speech and other complex stimuli. Their integration of basic research and clinical problems led to the establishment of the Center for Hearing Sciences in 1986 and the Research and Training Center for Hearing and Balance in 1991.

In announcing Trayanova’s appointment as the Murray B. Sachs Professor last month, Jones said, “Unlike most professorships, this endowment was not created by a single donor but through gifts from over 70 individuals—including alumni, faculty and staff from the Johns Hopkins schools of Engineering and Medicine—who wished to honor Murray’s legacy. I am thrilled,” he said, “to say that everyone involved in selecting Natalia for this honor, including Murray, believes she is a terrifically appropriate recipient, as she embodies the spirit of excellence that has always been the hallmark of the Department of Biomedical Engineering.”

Trayanova, who joined Johns Hopkins in 2006, is the school’s first female endowed professor. She oversees a research program focused on understanding the normal and pathological electrophysiological and electromechanical behavior of the human heart. Her emphasis is on the mechanism for cardiac arrhythmogenesis, cardiac electromechanical interactions and the improvement of the clinical therapies of defibrillation, infarct-related ventricular ablation and cardiac resynchronization therapy using a personalized approach.

McVeigh said, “The establishment of the Sachs Chair on our 50th anniversary is a fitting honor for Murray’s profound contributions to BME and Johns Hopkins. The appointment of Natalia as the inaugural Sachs Professor is truly wonderful because she uses innovative engineering to make discoveries about the heart, and focuses those discoveries on clinical applications that affect literally millions of people.”

The 50th anniversary celebration also included a keynote lecture in Hodson Hall by Elias Zerhouni, former executive vice dean of the Johns Hopkins School of Medicine and, from 2002 to 2008, director of the National Institutes of Health. Zerhouni spoke about challenges in biomedical innovation and rising health care costs associated with chronic disease worldwide.