Honoring the role of blacks at Johns Hopkins 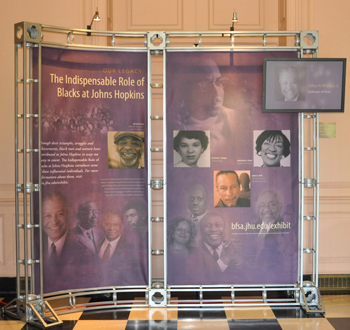 A traveling display highlights the personal and professional achievements of 50 black faculty, staff and students who have contributed to Johns Hopkins’ rich history. Photo: Meagan Magagna

Kelly Miller was born in South Carolina in 1863, the year the tide of the Civil War turned with the Battle of Gettysburg. Miller, the son of a free man and a slave woman, would head north when he turned 17 to chase his dreams of being a math scholar and honor his “band of heroes,” the northern teachers who came south after the war. Little did Miller know, as he sat on a northbound train, that he would make Johns Hopkins history.

Miller had earned a scholarship to attend Howard University, in Washington, D.C., and while there, met the prominent Canadian-born astronomer and mathematician Simon Newcomb, who would later join the Johns Hopkins faculty. In 1887, Miller sought Newcomb’s assistance in pursuing graduate studies at Johns Hopkins—and became the first African-American to enroll at the university.

Newcomb, by many accounts, approached university President Daniel Coit Gilman directly to consider Miller’s application. Gilman and the university’s trustees, after much debate, felt that Miller was deserving of acceptance and that they should honor the founder’s desire to create a university and hospital that were open to all. Miller’s admission would open the door for all future students of color at Johns Hopkins.

Miller’s role in the university’s history is highlighted in The Indispensable Role of Blacks at Johns Hopkins, an exhibit and website intended to recognize black students, faculty and staff who have contributed to the institution’s rich history through their personal and professional achievements.

The exhibit, launched this month, consists of a free-standing traveling display and also window decals featuring photos of men and women whose stories offer glimpses of the intertwined history of blacks and Johns Hopkins. The display and window images are supported by a website, bfsa.jhu.edu/exhibit, which includes brief narratives of 50 individuals, past and present, who contributed to the institution.

Along with Miller, the exhibit includes such people as Vivien Thomas, the surgical technician who in the 1940s developed the procedures used to treat “blue baby” syndrome; Joseph Hall, the first black dean on the Homewood campus (1973); university alumnus and current trustee Paula Boggs, an attorney and former vice president of Starbucks; Ben Carson, the pioneering neurosurgeon and a Presidential Medal of Freedom recipient; Percy Pierre, the first black student to earn a doctorate in electrical engineering at Johns Hopkins (1967), and a diversity and science education champion; Minnie Hargrow, an employee at Johns Hopkins for more than 60 years who started work in the campus cafeteria in 1947 and was an assistant to the president when she retired in 2007; and others from various fields and backgrounds.

The exhibit is co-sponsored by the President’s Office, Johns Hopkins External Affairs and Development, and the Black Faculty and Staff Association.

At the May 2011 BFSA general meeting with President Ronald J. Daniels and members of his cabinet, BFSA members raised the issue of the relative absence of black faces on the walls of the university and on university Web pages. BFSA members said they felt that this absence sent a negative message to visitors and prospective students and employees.

The president expressed his support for a solution, and BFSA members would later offer a proposal to university administration to augment the existing The History of African Americans@JHU website, created by students, with a new website and an accompanying exhibit.

In fall 2011, President Daniels appointed an advisory committee to plan, develop and implement the traveling exhibit on blacks at Johns Hopkins.

It debuted on May 1 at Mason Hall, with the website going live the same day. During the rest of the month, it will travel to buildings across the Homewood campus. On June 15, the exhibit will be on display in the Glass Pavilion as part of the BFSA’s annual Juneteenth celebration.

This summer, The Indispensable Role of Blacks at Johns Hopkins will travel to the Anne and Mike Armstrong Medical Education Building in East Baltimore, the Applied Physics Laboratory in Laurel, Md., and the School of Advanced International Studies in Washington, D.C. The School of Nursing, Carey Business School and the Bloomberg School of Public Health will host the display in the fall.

“This exhibit represents just one way to emphasize the wonderful, vibrant diversity of this community, now and throughout our history, ” Daniels says.

Debbie Savage, IT manager in the Office of Student Technology Services at Homewood and a BFSA member, says that the exhibit and the website will significantly raise awareness of these pioneering people.

“My hope is that this exhibit will show the indispensable roles blacks have [had at] Johns Hopkins in every way and every form, from custodial staff to trustees, physicians and attorneys,” Savage says. “All kinds of people make up Johns Hopkins, but sometimes looking in, people don’t see others who look like them in roles they can aspire to.”

Savage says that additions to the website will be considered each spring and that the exhibit will grow over time.

A full list of the traveling-exhibit dates is available at bfsa.jhu.edu/exhibit.