Thanks for the memory: Old material yields room for more data 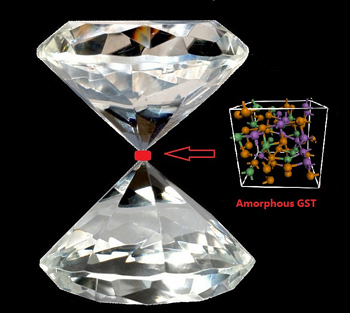 The work was reported April 16 in the early online edition of Proceedings of the National Academy of Sciences.

The research focused on an inexpensive phase-change memory alloy composed of germanium, antimony and tellurium, called GST for short. The material is already used in rewritable optical media, including CD-RW and DVD-RW discs. But by using diamond-tipped tools to apply pressure to the materials, the Johns Hopkins–led team uncovered new electrical resistance characteristics that could make GST even more useful to the computer and electronics industries.

“This phase-change memory is more stable than the material used in the current flash drives. It works 100 times faster and is rewritable millions of times,” said the study’s lead author, Ming Xu, a doctoral student in the Department of Materials Science and Engineering in Johns Hopkins’ Whiting School of Engineering. “Within about five years, it could also be used to replace hard drives in computers and give them more memory.”

GST is called a phase-change material because, when exposed to heat, areas of GST can change from an amorphous state, in which the atoms lack an ordered arrangement, to a crystalline state, in which the atoms are neatly lined up in a long-range order. In its amorphous state, GST is more resistant to electric current; in its crystalline state, it is less resistant. The two phases also reflect light differently, allowing the surface of a DVD to be read by a tiny laser. The two states represent ones and zeros, the language of computers.

Although this phase-change material has been used for at least two decades, the precise mechanics of this switch from one state to another have remained something of a mystery because it happens so quickly—in nanoseconds—when the material is heated.

To solve this mystery, Xu and his team used another method to trigger the change more gradually: two diamond tips to compress the material. They employed a process called X-ray diffraction and a computer simulation to document what was happening to the material at the atomic level. The researchers found that they could “tune” the electrical resistivity of the material during the time between its change from amorphous to crystalline form.

“Instead of going from black to white, it’s like finding shades or a shade of gray in between,” said Xu’s doctoral adviser, En Ma, a professor of materials science and engineering, and a co-author of the PNAS paper. “By having a wide range of resistance, you can have a lot more control. If you have multiple states, you can store a lot more data.”

Funding for the research was provided by the U.S. Department of Energy, the Office of Naval Research, the Chinese National Basic Research Program, the National Science Foundation, the W.M. Keck Foundation and Argonne National Laboratory.