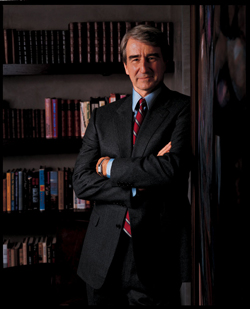 Actor Sam Waterston is the recipient of the Goodermote Humanitarian Award from the Johns Hopkins Bloomberg School of Public Health for his longtime support of the plight of refugees around the world. Waterston was presented with the award at a ceremony held at the school on May 9.

“Mr. Waterston’s acting accomplishments are well-known, but his work as an advocate for the displaced victims of war is far less celebrated,” said Michael J. Klag, dean of the Bloomberg School. “We admire Mr. Waterston’s support of this important cause and commend his commitment.”

Waterston is perhaps best known for his portrayal of district attorney Jack McCoy in the long-running television series Law & Order, for which he earned three Emmy nominations, a Screen Actors Guild Award, and Golden Globe and Screen Actors Guild nominations. He received an Oscar nomination for The Killing Fields, a film about the Khmer Rouge regime in Cambodia.

As a philanthropist and activist, Waterston has been a board member of Refugees International for more than 25 years. He also serves on the boards of Oceana, an ocean conservation organization; Austen Riggs, a Stockbridge, Mass., facility specializing in psychotherapeutic treatment of psychiatric disorders; and the Public Theater in New York City.

Waterston’s other accomplishments include three Emmy nominations and a Golden Globe Award for I’ll Fly Away and two Golden Globe nominations for the Nick Carraway role in The Great Gatsby. He was awarded an Emmy as host of the 10-part NBC informational series Lost Civilizations and, in England, has received numerous BAFTA nominations. Waterston earned a Tony Award nomination as Lincoln in Abe Lincoln in Illinois and an Obie Award and a Drama Desk Award for his Benedick in Much Ado About Nothing.

Waterston is a graduate of Yale University and lives in Connecticut with his wife, Lynn. They have four children and three grandchildren.

In addition to the award, the Goodermote family has established a scholarship for students studying international health who are committed to addressing the needs of displaced people and to furthering the mission of the Center for Refugee and Disaster Response.

The awards presentation is available for viewing online at jhsph.edu/refugee/waterston.html.