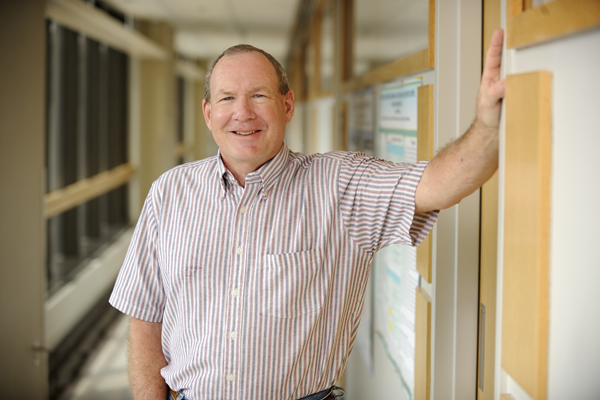 Robert J. Adams, a veterinarian, biomedical researcher and member of the faculty for 35 years, has been appointed associate provost for animal research and resources at The Johns Hopkins University.

Adams, who had been filling the position on an interim basis, directs the care of more than 150,000 animals—the vast majority of them mice and rats—that university researchers use to learn about the basic processes of life and to devise new disease treatments. He also advises university leadership and faculty members on issues pertaining to the use of animals in research.

“Bob Adams is a talented veterinarian with a deep understanding of research methodology,” said Scott Zeger, vice provost for research, to whom Adams reports. “He understands how to get the job done, even under resource constraints.”

Adams joined the faculty of the School of Medicine in 1977, becoming director of the Division of Animal Services and Laboratory Animal Medicine two years later. In addition to current roles as the university’s attending veterinarian and director of research animal resources, he is an associate professor in the Department of Molecular and Comparative Pathobiology and remains an active researcher.

“I love the place,” Adams said of his career-long tenure at Johns Hopkins. “I love the work; I love the research. I like the whole environment here.”

Adams’ 12 veterinarians and 63 staff provide round-the-clock care for animals housed on the university’s East Baltimore, Bayview and Homewood campuses, ensuring compliance with federal law and regulations and with accreditation requirements of the Association for the Assessment and Accreditation of Laboratory Animal Care International. They also train faculty and staff members and students in the proper handling of and care for research animals.

Nancy Ator, professor in the Department of Psychiatry and Behavioral Sciences and chair of the university’s Institutional Animal Care and Use Committee, said that Adams “long has played a critical role” in the committee’s approval and oversight of research protocols involving animals.

“He is incredibly valuable on the IACUC, not only because of his complete familiarity with many of the Johns Hopkins faculty but also because of his keen grasp of the goals of the research,” Ator said. “He often can point out pitfalls of planned approaches and guide researchers to a more productive one. His obvious great appreciation for and understanding of the value and innovation of the animal research protocols we review enables him to communicate effectively with faculty.”

Nearly every advance in human medical care depends on research involving species whose biology in some way mirrors that of humans. Animals are also critical to building more fundamental knowledge in areas such as genetics, perception, cognition, human development and the aging process.

Adams is a 1969 graduate of the State University of New York at Oneonta and earned his Doctor of Veterinary Medicine degree at Cornell University in 1973. After a year in private practice, he first came to Johns Hopkins in 1974 as a postdoctoral fellow in the Division of Comparative Medicine in the School of Medicine.