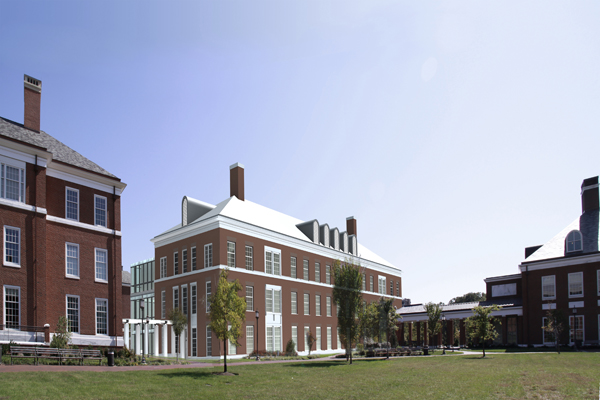 Johns Hopkins University leaders, trustees, faculty, students and guests will gather on Wednesday, May 23, on the Homewood campus for the groundbreaking of Malone Hall, a 69,000-square-foot, state-of-the-art building on the Alonzo G. and Virginia G. Decker Quadrangle that will house at least three collaborative research institutes.

The building is made possible through a $30 million gift to the Whiting School of Engineering given in 2010 by alumnus John C. Malone, who received his doctorate from Johns Hopkins in 1969. Chairman of Liberty Media Corp. and Liberty Global Inc., Malone is widely recognized as a pioneer in the communications and media industries. He will be on campus for the event, which will begin at 3 p.m.

Malone Hall will house the recently announced Hopkins Extreme Materials Institute, which was created to spearhead a national effort to equip the U.S. Department of Defense with lighter, more protective armor. The institute, to be headed by K.T. Ramesh, the Alonzo G. Decker Jr. Chair of Science and Engineering and a professor of mechanical engineering, will bring together military, academic and industrial partners to create the high-tech protective materials of the 21st century.

Malone Hall will also be the Homewood campus hub for the university’s individualized health initiative, an effort that brings together researchers from the schools of Engineering, Medicine, Nursing and Public Health to develop the most effective medical treatments for individual patients.

“The vision of John Malone, and the construction of Malone Hall, lets us move forward to tackle some of the most critical issues facing our nation,” said Nicholas P. Jones, the Benjamin T. Rome Dean of the Whiting School. “We must act swiftly and decisively to bring together scientists and clinicians from many disciplines to solve these pressing problems, whether they be national security, health care for individuals or global sustainability.”

Also on Wednesday, Russell H. Taylor, a professor in Computer Science with joint appointments in Mechanical Engineering, Radiology and Surgery and director of the NSF Engineering Research Center for Computer-Integrated Surgical Systems and Technology, will be installed as the Whiting School’s John C. Malone Professor. Taylor, who received his bachelor’s degree from Johns Hopkins in 1970, is widely regarded as a visionary who has laid much of the groundwork for medical robotics.

Malone and Taylor overlapped briefly during their academic years on the Homewood campus. When Malone was finishing his PhD in operations research, Taylor was an undergraduate studying engineering science. Taylor is cited in Malone’s dissertation for his “able programming” and for coding an algorithm.