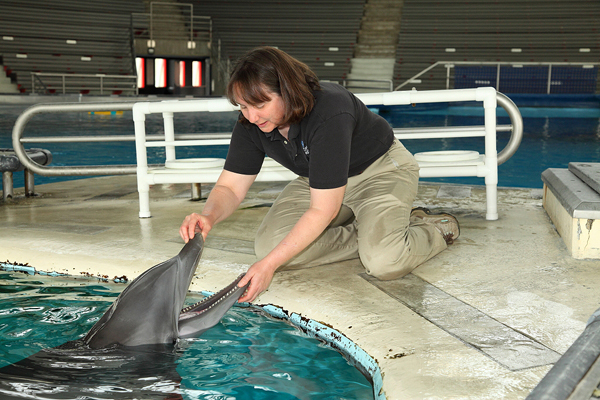 Amid growing concerns about the spread of harmful mercury in plants and animals, a new study by researchers from The Johns Hopkins University and the National Aquarium has compared levels of the chemical in captive dolphins and in dolphins found in the wild. The captive animals were fed a controlled diet, while the wild mammals dined on marine life that may carry more of the toxic metal.

The study found lower levels of mercury in the captive animals, particularly compared to wild dolphins tested off the Atlantic and Gulf coasts of Florida, a state that is in the path of mercury-laden fumes from power plants. The aquarium dolphins are fed smaller fish from North Atlantic waters, where mercury pollution is less prevalent.

The findings were published in a recent issue of Science of the Total Environment.

Although these results represent a significant case study, the research focused on a small number of animals, and Edward Bouwer, chair of the Department of Geography and Environmental Engineering in Johns Hopkins’ Whiting School of Engineering and supervisor/co-author of the study, cautioned against drawing wide-ranging conclusions from the research.

“This is just one snapshot, one puzzle piece,” Bouwer said. “What we’d like to do now is repeat this project with aquariums in other parts of the world. The goal is to get a clearer comparison of mercury-related health risks facing dolphins both in captivity and in the wild. This type of research can give us hints about how the type of diet and where it originated can affect mercury-related health problems in captive dolphins, compared to their cousins in the wild.”

Public health officials are concerned about human consumption of mercury, particularly in a form called methylmercury, because it can damage the brain and other parts of the nervous system, especially in young children. Dolphins that ingest too much methylmercury can suffer similar harm.

Mercury is emitted as a gas from coal- and oil-fired power plants. Some makes its way into the ocean, where bacteria turn it into methylmercury, which moves up the food chain. Eventually, it turns up in the large fish that serve as dinner for wild dolphins. Once ingested, the heavy metal makes its way into the animals’ bloodstream, where it can begin to damage the nervous system.

With this in mind, the Johns Hopkins–National Aquarium researchers wanted to investigate mercury exposure differences between captive and wild dolphins whose diets came from different regions. The team collected blood samples from seven aquarium dolphins, ages 2 to 38, and tested them for mercury, methylmercury and a third chemical, selenium, which appears to help ward off the toxic effects.

The researchers compared their results to those derived from wild dolphin blood samples collected in earlier capture-and-release studies conducted in the waters off Charleston, S.C.; Indian River Lagoon, on Florida’s Atlantic coast; and Sarasota, on Florida’s Gulf Coast.

“While mercury levels in the wild dolphins off South Carolina were slightly higher than those in the National Aquarium dolphins, readings from the dolphins off the Florida coasts were significantly higher,” said Yongseok Hong, a postdoctoral fellow in Geography and Environmental Engineering at Johns Hopkins and lead author of the study.

“The difference in mercury exposure was attributed to differences in the dolphins’ diets,” Hong said. “The aquarium dolphins were fed a consistent level of small fish—capelin and herring—that were caught in North Atlantic waters off Newfoundland and New England. Lower levels of mercury are expected in these waters, compared to the waters off Florida.”

The team members who care for the dolphins at the National Aquarium in Baltimore were pleased by the study’s findings.

“The National Aquarium team is enthusiastic about contributing to this study in order to more fully evaluate the food we feed our marine mammals,” said Leigh Clayton, the aquarium’s director of animal health. “It is important that we gain a better understanding of the mercury levels in the North Atlantic food chain in order to ensure we’re providing the best diet possible to our dolphins. The research we have done with Johns Hopkins has provided helpful information for our marine mammals team and allows us, at this time, to have confidence that our current fish food sources do not have excessively elevated mercury levels.”

Last December, after the study was conducted, the U.S. Environmental Protection Agency adopted strict new standards aimed at reducing the release of toxic air pollution from coal- and oil-fired power plants, a key source of mercury contamination in seawater.

Funding for the research was provided by the National Aquarium and the Center for Contaminant Transport Fate and Remediation at The Johns Hopkins University.