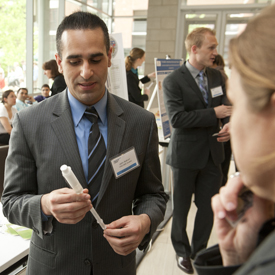 CBID student John Sidhom talks about his team’s CryoPop invention at BME Design Day 2012. Sidhom graduated from the Whiting School in May and will be entering the School of Medicine.

A Johns Hopkins team took first prize in the 2012 BMEidea competition, sponsored by the National Collegiate Inventors and Innovators Alliance. The winning design, CryoPop, is a low-cost medical device that uses dry ice for the treatment of cervical precancerous lesions. Today cervical cancer kills an estimated 250,000 women, with 85 percent of the disease burden occurring in low-resource or developing countries. The CryoPop relies only on carbon dioxide tanks, which are already available in developing countries (as a result of the presence of soda companies), and is 10 times cheaper, 30 times more efficient, and more effective and reliable than the currently utilized technology. The project, sponsored by Jhpiego, was presented at BME Design Day 2012. Team members from the Whiting School’s Center for Bioengineering Innovation and Design included Marton Varady, Shuja Dawood and John Sidhom.